In this article I’ll try to show how to use an MSP430 with a DAC7564. This is probably the first from a series of articles showing different devices I plan to use in a project.
The DAC7564
The DAC7564 is a low-power, voltage-output, four-channel, 12-bit digital-to-analog converter (DAC). The device includes a 2.5V, 2ppm/°C internal reference. The device is monotonic, provides very good linearity, and minimizes undesired code-to-code transient voltages (glitch).  A DAC is said to be monotonic if the output either increases or remains constant for increasing digital inputs such that the output will always be a no decreasing function of input. The DAC7564 architecture consists of a string DAC followed by an output buffer amplifier. 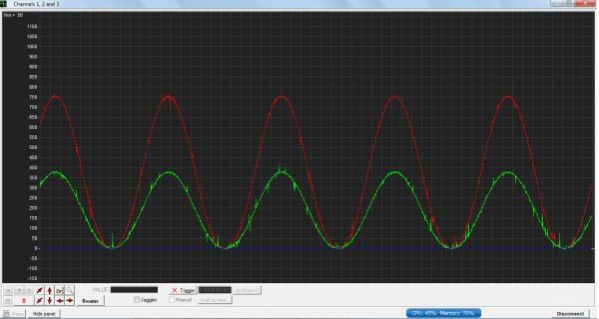 An N-bit string DAC simply consists of 2N equal resistors in series and 2N switches (usually CMOS), one between each node of the chain and the output. The output is taken from the appropriate tap by closing just one of the switches. The string DAC is inherently monotonic—even if a resistor is accidentally short-circuited, output n cannot exceed output n + 1.
Linearity error of a converter is a deviation of the analog values, in a plot of the measured conversion relationship, from a straight line. The string DAC it is lineal if all the resistors are equal.
A glitch is a switching transient appearing in the output during a code transition. The worst-case DAC glitch (in R-2R) generally occurs when the DAC is switched between the 011…111 and 100…000 codes. In sting DACs only two switches operate during a transition, resulting in a low-glitch architecture Also, the switching glitch is not code-dependent.
The DAC7564 uses a versatile 3-wire serial interface that operates at clock rates up to 50MHz. The interface is compatible with standard SPI, QSPI, Micro wire, and digital signal processor (DSP) interfaces.