I hate articles titled “Ten … myths debunked.” I would have to start by listing a round number of clumsily worded claims by the non-feedback camp who probably never said any such thing, and juxtapose some simplified school-book explanations to put them right.
And after shooting, flaying and roasting alive my straw men and generally hammering home that feedback doesn’t work like that, I should then fail to explain why not. This would leave an excellent status quo where everyone has had their say and truths remain somewhere in the middle.
I want to do better than that. It’s no proof of intelligence to open a debate pointing out the supposed “extremes” of the opinion spectrum and then taking some imagined middle ground. When person A says that 2+2=5 and person B says that 2+2=6, the most reasonable position to take is not five and a half. 2+2=5.5 can hardly be called moderate. In fact it is a very, very extreme claim. The author’s reputation for strong opinions notwithstanding, you will find no such extreme claims in this article. 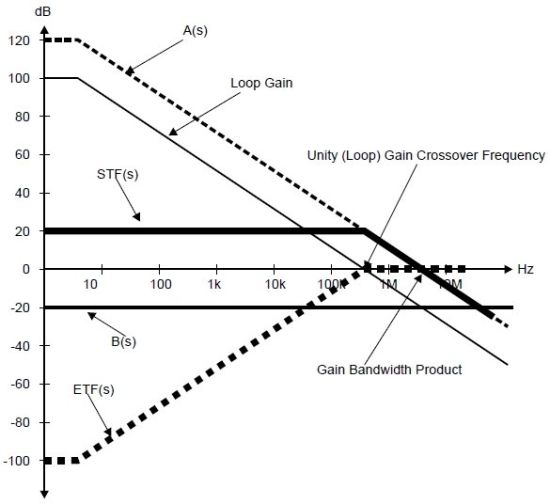 What is negative feedback (NFB)? “Feedback is an arrangement where an amplifier is made to respond to its own output signal in addition to the wanted input signal and any unwanted disturbances. When the response to an unwanted disturbance is smaller with feedback applied than without it, we call it negative feedback.”
Outside of audio, the subject is covered by an extremely comprehensive discipline called control theory, which deals with negative feedback around just about any process to keep it more, or even at all, stable. At the peril of stating the obvious, here’s the simplified example of a feedback loop as one might find it in an audio amplifier:
In Figure 1, s is the complex frequency 2πjf. B(s) is usually a constant, namely the attenuation of the feedback network written as a gain of 1 or less. Unfortunately we can’t make A(s) frequency independent. Any physical system has inertia. Ignoring this will make the system overreact catastrophically. We need to mitigate the initial response to an error; otherwise we’ll treat the inertia as an error as well and try to fight it. On the other hand we don’t need to under-respond in the long run. The simplest workable control function is an integrator.