On May 17, 1902, a Greek archeologist noticed precision gear wheels embedded in an ancient artifact of corroded bronze and wood. The device would come to be known as the Anti Cythera mechanism, the oldest known complex scientific instrument.
Discovered in 1900 on the wreck of an ancient Roman merchant vessel near the island of Anti Cythera, the 2000-year-old device was designed to calculate astronomical positions, predict eclipses, and calculate the timing of the ancient Olympics. It is now regarded as the world’s first mechanical computer.
Enclosed in a wooden box roughly 30-cm tall and 20-cm wide, the mechanism contained more than 30 bronze gear wheels crafted with the precision and complexity of a modern clock. 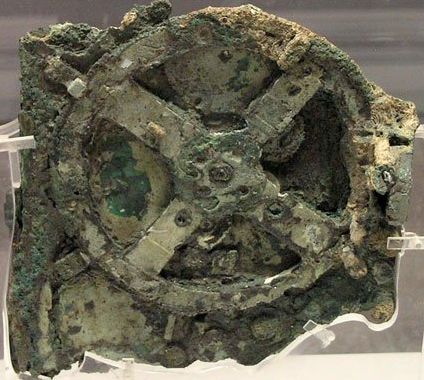 Because of its condition, the mechanism wasn’t investigated until 1951 when English physicist Derek J de Sole Price began studying it with x-rays. Price used the mechanism fragments to develop a model incorporating the ancient Me tonic cycle of the sun and moon, which was key to understanding the device.
Recent use of 3-D x-ray and photography techniques have allowed researchers to see the gears in layers and study the fragments in greater detail to learn more about the mechanism’s purpose and origin. The mechanism could be from as early as 140 BC and is technically more complex than any known device for at least a millennium afterward. Months inscribed on the dials were identified as Corinthian, meaning it is likely from northwestern Greece or Syracuse in Sicily. Syracuse was also the home of Archimedes, a renowned ancient scientist and mathematician who later built similar devices
Read More: Gears are discovered on the Antikythera mechanism, May 17, 1902