When I made the PCB for the stand-alone inductance meter, I erroneously used a  SSOP footprint for the microcontroller (instead of the desired SOIC). The PIC is available in a SSOP package (PIC16F1963-I/SS instead of PIC16F1936-I/SO) but I didn’t have any at hand so I simply made a new board with a SOIC footprint.
Apart from the footprint, the SSOP board is identical to what I’ve finally used and is fully functional. If anyone is interested I’m happy to give it away for free – first come, first served.
By the way, I’m building a second inductance meter for my father who has asked me if he could get one, too. It’s technically identical but this time the 3D-printer had orange PLA in it so I used just that.
By pure coincident, the color just about matches the newer Agilent / Key sight multi meters
If you’ve read my last post you’re already familiar with my Inductance Meter project: http://soldernerd.com/2015/01/14/stand-alone-inductance-meter/. At that time the hardware was ready but there was no software yet. That’s been corrected, the inductance meter is now fully functional.
From a high-level point of view the new software is very similar to the Arduino sketch I wrote for the Inductance Meter Shield (http://soldernerd.com/2014/12/14/arduino-based-inductance-meter/). If you look a bit closer, you’ll notice some differences for several reasons:

*: In an earlier version I wrote 16F1932 instead of 1936. Thanks to Ralph Don caster for pointing this out to me. By the way, Ralph has his own blog at http://nerdralph.blogspot.ca which I regularly enjoy reading. 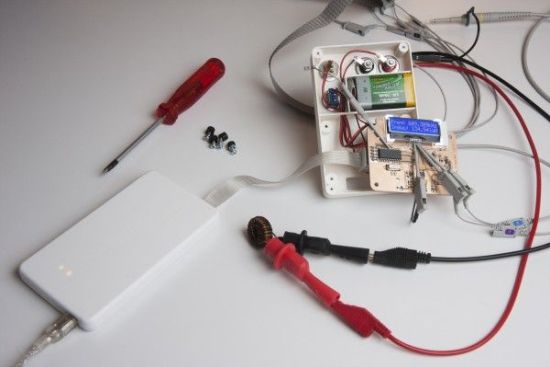 I’ve noticed that the MikroC compiler is not very popular among hobbyists but I like using it. It’s entirely free as long as your compiled code does not exceed a certain size. You can use any features, any library, just anything for free when you’re getting started. Yes, once your projects get bigger you’ll run into the limit and will have to buy a license but it was worth the price to me.

As expected, the I2C display took me some time to get used to. It’s a MIDAS MCCOG21605B6W-BNMLWI (Farnell: 2063209). It seems to use a Hitachi-compatible controller with a I2C interface built on top of it. I like the concept and will probabely use one of these again. If there is a downside, it’s the data sheet. I had to do quite a bit of guessing and trial-and-error to get it working. I had used Hitachi-compatible MIDAS displays before so I had some idea what might work otherwise I might have given up. Examples?