Most commercial LED flashlights use three AAA or AA batteries in series that produce 4.5V. The batteries then drive four white LEDs that connect in parallel. These LEDs can work at voltages as low as 2.7V and, in some cases, 2.4V. At those voltages, the LEDs become dim, and you must frequently change the batteries. Thus, the lowest working voltage in this case is approximately 0.8 to 0.9V per battery. 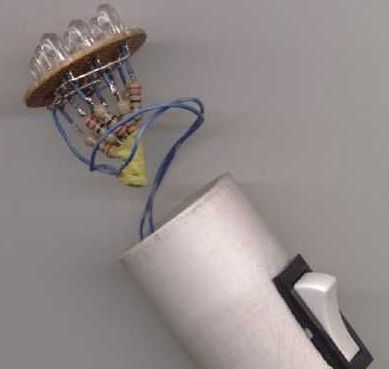 When a 1.5V alkaline battery discharges to 0.9V, it still has more than 10% of its original energy left. If you replace or discard the battery, you waste that energy. You can, however, use this small amount of battery energy with the circuit in Figure 1. The Linear Technology LT1932 LED driver is a step-up voltage-booster chip with constant-current capability for LED lighting. It works with input voltages of 1 to 10V, and it can drive several serial LEDs.
The trick is to choose the supply voltage. Because LT1932 can work at voltages as low as 1V, using a two-cell, 3V supply results in the lowest working voltage: 0.5V per cell. Choosing a three-cell, 4.5V supply results in a lower voltage of 0.33V per cell. A 4.5V supply can power as many as eight LEDs. Tests show that this circuit works from 4.5V to 0.94V, which is lower than the data-sheet-specified 1V. The LED driver uses a 4.7-μH inductor.
Setting the value of resistor R1 regulates the constant current through the LEDs. Setting a higher resistance results in lower brightness. In this case, the current is 18 mA. The LT1932 is available only in a surface-mount, tiny, six-pin SOT package, with fine pitch as small as 0.037 in. So, using it requires a PCB (printed-circuit board). 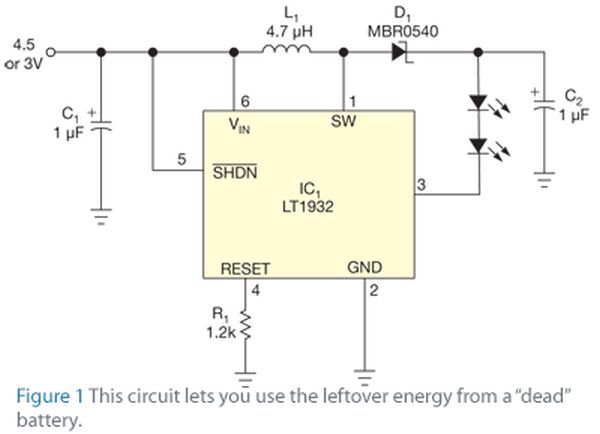 Once you build a flashlight with this circuit, you don’t throw away the “dead” batteries from commercial LED flashlights. Instead, use them to feed the LT1932 circuit. Depending on whether you use an AA or an AAA cell, it will give you a few more hours of light. Keep in mind that some battery manufacturers define0.5V per cell as an alkaline battery’s cut off voltage and recommend that you remove the battery from the load to avoid the possibility of battery leakage and gassing effects. Don’t let these effects happen to your flashlight.