Digi-Lev
“On the level with digital accuracy.”

The Digi-Lev digital level is a culminating design project for the ECE 476 Microcontrollers course taught by Prof. Bruce Land at the Cornell University department of Electrical and Computer Engineering. Two inventive and industrious students set out to build a position tracking device and one month later became the proud designers of the Digi-Lev digital leveling device. That is our story…read on to find out more about the Digi-Lev, what it does, how it works, and what it can do for you!
We have designed the Digi-Lev to displace the old-fashioned levels used for building and construction with a more accurate, flexible, and full-featured device. The typical level is a piece of measuring equipment consisting of a bubble trapped in liquid to help its user determine if the device is level (perpendicular to the gravitational field). The buoyancy of the bubble will cause it to move off center when the device is tilted. By leveling the device, the bubble comes to rest in the center of two hash marks indicating that the device is indeed level. 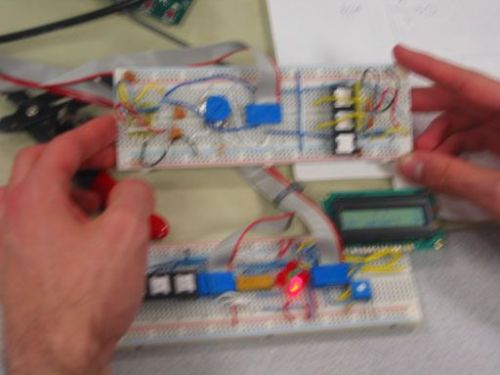 Just like a ruler and a scale, the typical level is an analog device and thus subject to error and inconsistency. The user must make a judgment on whether the bubble is indeed centered between the hash marks and the shape of the bubble may vary. Just as the digital caliper and scale have replaced their analog predecessors in applications requiring accuracy and consistency, so comes the Digi-Lev to replace the analog levels of old.
We have designed the Digi-Lev with ease of use in mind. By taking advantage of the computing capabilities of the embedded microcontroller we were able to provide the user many options not available on a typical level while main ting the same intuitive usability. The Digi-Lev works just like a regular level. Place it flush with a surface and it will indicate whether or not the surface is level. It even has a display screen which simulates the bubble of the analog level. A green centered LED lights up to indicate that the device is level. If you stand the level up (perhaps to level a wall as opposed to a floor) the Digi-Lev detects its new orientation and updates the display accordingly. The Digi-Lev also comes equipped with calibration options. The device can be re-calibrated in both of its orientations and the new calibration values can be stored for later use.
So come on and level with us. Level with Digi-Lev.

We would like to take this opportunity to give special thanks to Professor Bruce Land for his help and support not only on this project but throughout the semester. We would also like to thank Paul Grzymkowski, Andre Kozaczka, and Sean Keller, the teaching assistants who were so patient with us and were always willing to lend a helping hand. Now on with the specific tasks… a short description of who did what.

Oren finalized the various versions of the code we were using. He converted the floating point operations which took far too long, to fixed point ones. He also was in charge of interfacing the LCD to the MCU.

Matthew built the initial amplification circuits that were eventually abandoned when we switched to the digital level design. He interfaced the LEDs and switches with the MCU and wrote a few of the many drafts of code written for the project.

Both Oren and Matthew worked on the software quite extensively. They spent many long hours debugging/interpreting the output of the accelerometers and figuring out how to get useful output from them. They also spent many hours figuring out the best way to convey useful information to the user and how to make the system more user friendly.

Finally, we divided up the sections of this website and generated the content in parallel. See if you can figure out who wrote what based on the writing styles. Contact us for the answers: