In a bid to bring affordable solar technology to the market by 2017, IBM Research and Airlight Energy (Switzerland) have partnered to produce a solar parabolic dish that can concentrate the sun’s radiation by 2,000 times and convert 80% of it into useful energy. The system is said to be able to generate 12 kW of electrical power and 20 kW of heat under sunny conditions, and will be capable of providing both power and hot water/air conditioning to several homes.
Standing 33-feet high and weighing approximately 10 tons, the high-concentration photovoltaic thermal (HCPVT) system is based around an array of water-cooled solar chips, which receive the focused sunlight directed at them from 36 elliptic mirrors made of 0.2-mm-thick recyclable foil with a silver coating. The 40-m2 parabolic dish, which is made of patented fiber-based concrete, automatically tracks the sun throughout the day to optimize the capture of solar radiation. 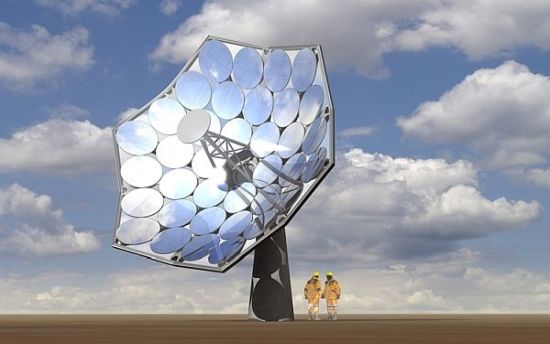 Treated water piped within a few tens of micrometers of the photovoltaic chips maintain them at a safe operating temperature of 105°C. The hot water produced in the process can then be used for heating/cooling or as drinkable water after desalination. According to the companies, a large multi-dish installation could provide enough water for a town.
Read More: IBM ‘sunflower’ solar concentrator produces energy and hot water