After a year or so of reading and drooling over other people’s wonderful projects in these pages I decided to finally make one of my own. Here is my first instruct able, a version of the ever popular Battery Desulfator, which I built in an Alto IDs tin.
First, some background:
My urge to build this project came when my wife’s car refused to turn over after a three day weekend away. Here in Tokyo, during winter, the temperature can drop to the low 20’s (F) at night and since we have no garage, her car just has to endure the cold as best it can. Many people don’t realize that you don’t have put up with repeated jump-starts or run to the nearest garage and plunk down 7,500 yen ($85) for a new battery every time this happens. Your old battery may just have built up a layer of lead sulphate crystals on its plates and that is preventing the acid from contacting them over their full surface area. This is caused by subjecting the battery to long periods of insufficient charge, as in the cases of unplugged golf carts over the winter, infrequently used automobiles, and PV systems that don’t get enough sunlight to charge their batteries. The result is a great reduction in the battery’s ability to produce electricity. 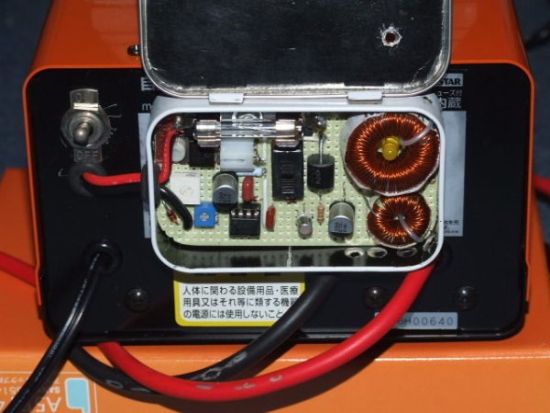 With a desulfator circuit you can reverse this process and rejuvenate the battery to like new condition. You can also save money and prevent water and ground pollution at the same time by keeping your old battery out of the local landfill. As long as nothing is seriously wrong with the battery it can last many times the two or three years that people typically use them. You can even get free batteries from garages that routinely throw them away, desulfate them, and never buy another battery again. Save money and help the environment – now there’s a green ecology scheme I can get into!
Most DIY desulfator circuits in use today can trace their roots back to an article in issue # 77 of Home Power magazine written by Alistair Cooper in June/July of 2000. Many versions were spawned by his design but they all accomplish the same thing, that is, they use various pulsing circuits to force the lead sulphate crystals back into the electrolyte thus rejuvenating the battery and restoring its lost capacity. The version I chose uses an NE555P timer chip for the multivibrator front end and two coils, a low ESR cap, a fast diode, and an N-channel MOSFET (hereafter referred to as a FET) to generate the high voltage (50V) spikes in the output. Credit goes to Ron Ingraham for changing the design to use an N–channel FET instead of the harder to find and more expensive P-channel types in the earlier versions. Along the way I couldn’t resist adding a few tricks of my own to make the design more convenient. See this link for a description of the theory and other information on desulfators.