Researchers at The University of Texas at Dallas are sweating the small stuff in their efforts to develop a wearable device that can monitor an individual’s glucose level via perspiration on the skin.

In a study recently published online in the journal Sensors and Actuators B: Chemical, Dr. Shalini Prasad, professor of bioengineering in the Erik Jonsson School of Engineering and Computer Science, and her co-authors demonstrated the capabilities of a biosensor they designed to reliably detect and quantify glucose in human sweat.

The team has previously demonstrated that their technology can detect cortisol in perspiration.
But for diabetics and those at risk for diabetes, self-monitoring of blood glucose, or blood sugar, is an important part of managing their conditions.
“Fitness trackers that monitor heart rate and step count are very popular, but wearable, non-invasive biosensors would be extremely beneficial for managing diseases,” said Prasad, the Cecil H. and Ida Green Professor in Systems Biology Science.
Typical home-use blood glucose monitors require a user to obtain a small blood sample, usually through the prick of a finger and often several times a day. However, the UT Dallas textile-based sensor detects glucose in the small amount of ambient sweat on a person’s skin. 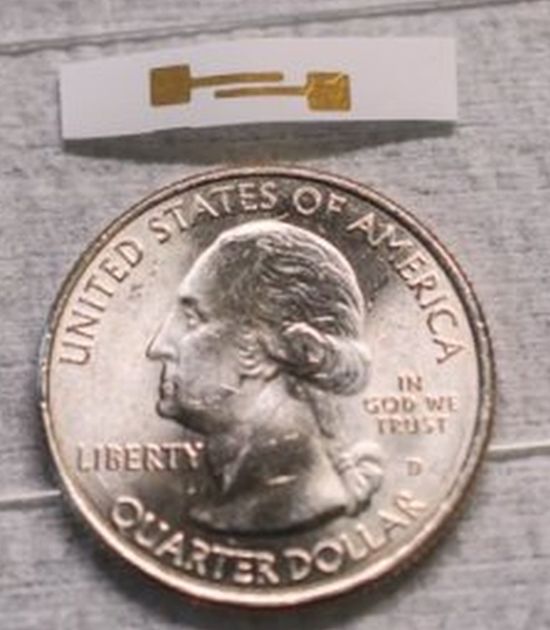 “In our sensor mechanism, we use the same chemistry and enzymatic reaction that are incorporated into blood glucose testing strips,” Prasad said. “But in our design, we had to account for the low volume of ambient sweat that would be present in areas such as under a watch or wrist device, or under a patch that lies next to the skin.”
Prasad said that researchers who work with sweat often use a process called ion to phoresis, which sends an electric current through the skin to generate enough perspiration for sensing experiments. However, because this method can lead to rashes and burns on the skin, the team sought an alternative that would work with small amounts of sweat.
Their design works with volumes of sweat less than a microliter, which is the approximate amount of liquid that would fit in a cube the size of a salt crystal.
The technology also provides a real-time response in the form of a digital readout.
Prasad and bioengineering doctoral student Rujuta Munje, lead author of the journal article, incorporated an off-the-shelf polymer-based textile material in their glucose sensor and used UT Dallas clean-room facilities to construct the electronic elements. The prototype is a small, flexible, rod-shaped device about an inch long.
“We used known properties of textiles and weaves in our design,” Prasad said. “What was innovative was the way we incorporated and positioned the electrodes onto this textile in such a way that allows a very small volume of sweat to spread effectively through the surface.”
Read More: Bioengineers’ sweat sensor monitors glucose