Having explained the theory, let’s see in practice the project of the SEPIC power supply.

In this post we discussed – on a theoretical level (even if in a simplified way) – the SEPIC switching converters, also highlighting advantages and disadvantages, and giving you the basics for the calculation of their components. Let’s get to the heart of the project, now; we will present a practical application of the previously explained concepts: a power supply that we named Torpedo. It is a switched-mode power supply with a SEPIC configuration, that was born in order to execute some tests finalized to substitute – when we were developing our Fishino UNO board – the underperforming linear regulator that was found in it, and in all Arduino boards. The features that we wanted were:

As we will see later, all the project specifications have been respected in Torpedo. 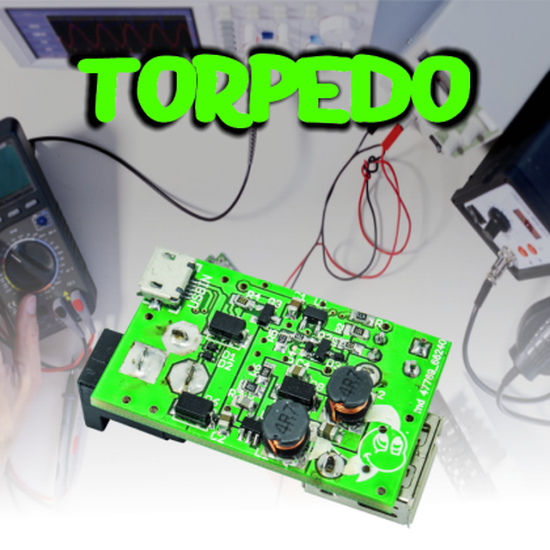 In order to better understand our circuit’s functioning, we may divide the diagram in three blocks:

The input stage is composed mainly of the D5 and D6 diodes, that coupled with the Q1 MOSFET form the power source selector.
We will momentarily neglect the Q1 MOSFET and deal only with the D5 and D6 diodes and with the protection diode that is internal to the MOSFET itself: the three voltages – coming from an equal number of inputs, BAT, USBIN and PS1 – directly polarize the three diodes and therefore tend to make them start to conduct, reaching up to U2’s VIN pin. Clearly, the greatest voltage among the three of them brings the diode to conduct and causes the interdiction of the other two, that turn out to be inversely polarized; this system is actually an OR power port, that is to say, it carries out the selection by bringing the highest voltage (among the three available ones) to VIN. The diodes prevent that the highest voltage goes to an input having a lower voltage. 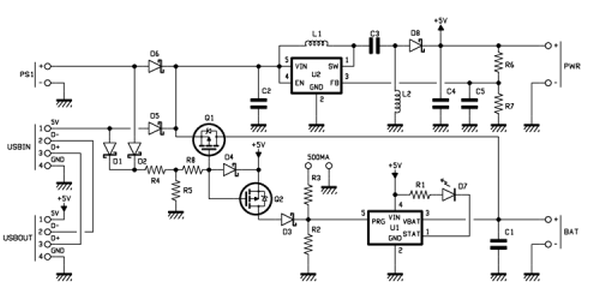 The above said diodes (D5, D6 and the diode that is internal to the MOSFET) have – as all diodes do – a voltage drop: it may be more or less high, and it brings to a power dissipation under the form of heat that may be relevant for high currents.
We will give a pair of examples, so to clarify the concept

The conditions are: voltage input of 12 volts, voltage output of 5 volts, absorbed current from the load of 1 ampere and converter’s efficiency being 100%. The input current, under these conditions, is equal to:
Read More: TORPEDO: an all-purpose switched-mode power supply