My obsession of this year is full-color LED. I have made Aurora 9×18 as a result. As much as I love the scale of Aurora 9×18, I also wanted to have something smaller, perhaps something that can go on a costume.
Here’s Aurora mini 18. It has 18 full-color/RGB LEDs on a smallest possible circle. With a single PIC microcontroller, changing 18 RGB LEDs smoothly is reaching the technical limit. With the new PIC with wider supply voltage, the circuit is simplified compared to Aurora 9 bar, and use of two AA or AAA batteries (3V operation) or one Lithium battery is now possible. 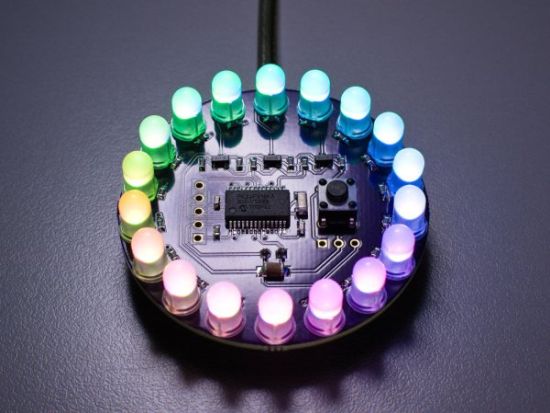 Like Aurora 9 bar, Aurora mini 18 borrows its circuit from Aurora 9×18. Operating principle is exactly the same. Just extended the hardware and software to control more LEDs.
One of the new 24F line of PIC microcontrollers is PIC24FV16KA302. Unlike the similar PIC24F series controllers which are 3.3V limited, this controller can operate fully up to 5V. This eliminated the need for the 3.3V voltage regulator, and simplified the LED driving circuits. The resulted circuit with fewer parts count made this Aurora to be very compact.
Aurora mini 18 uses surface-mount technology (SMT). If you’ve never built anything with SMT, this might be a good opportunity to try out. You will most likely realize that there’s nothing to fear about SMT. (If you are not familiar with soldering, you might get your feet wet with something simpler than this though.)