It should come as no surprise that I really really want a Tesla.  Or really any Electric Vehicle for that matter.  The only problem at the moment is that my daily commute takes me 20 minutes on foot each way, so I really can’t justify buying a car that will spend most of its life parked in a garage or parked in Seattle traffic.
That’s why I have to live vicariously through other people, and why I got super excited when I learned that my dad put down a deposit on a new Model S.
It hides it well, but the Model S is a massive car with a length of 196 inches and a weight over 4700 pounds.  My dad originally planned on parking the car in his driveway, but when it came time to install the charging port, he opted for the garage instead.  The only problem was that his garage only offers about six inches of clearance to be shared between the front and back of the car.
This predicament gave me some great gift ideas.  With the holidays fast approaching and all of the other projects that I wanted to finish before heading home, I originally did a quick Amazon search for ultrasonic parking sensors.  Sadly, most of them “bottom out” at a fairly reasonable one foot.  I couldn’t find any that would drop to the two to three inch range.
So I added another project to my list and got to work!

Step one was acquiring an ultrasonic sensor.  As it happens, I had one of these handy:
A few years ago, I acquired one of these while trying to make an ultrasonic early warning collision system for smartphone users who are too engrossed in their Twitter feed to watch where they’re walking.  That project didn’t go anywhere…
The PING))) sensor works like most ultrasonic sensors by producing a high frequency sound and waiting to hear it bounce off something and return.  Interfacing with it consists of providing an electrical pulse on the signal line after which it will produce a single square wave whose width roughly corresponds to the duration between sound transmission and reception.  You can read more about it here. 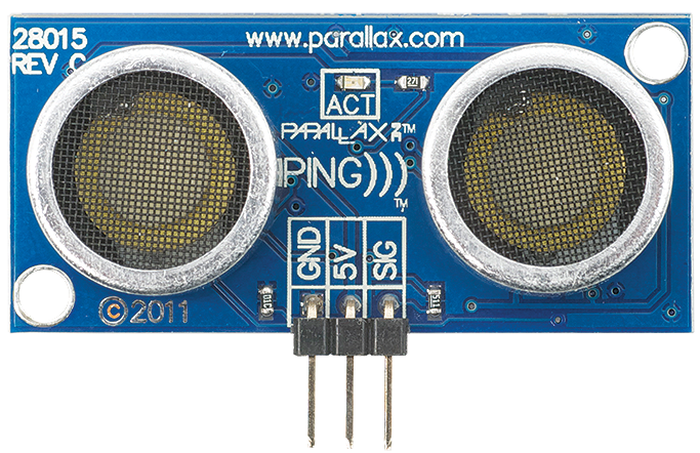 The PING))) sensor is super easy to use, but the form factor wasn’t going to work for something that I eventually wanted to fit into a phone case.  I also felt like I should build one from scratch considering that I write a blog about how I make things.
I never did manage to build one from scratch, but I did go far enough to order some 40kHz transducers:
and begin a moderate teardown of the sensor:
When it came to making a parking sensor for my dad in just a few weeks, I didn’t have enough time to fulfill my original goal of building one from scratch, so I ultimately used the PING))).
That being said, there’s still some interesting things that I learned from the teardown regardless of how incomplete it is, so I thought I’d take some time to interpret my two-year-old notes and share some of those learnings with you.
Read More: Ultrasonic parking sensor