Since the coming of the Raspberry Pi Model B, single-board computers (SBCs) have become a prevalent force in the development world. These pocket-sized devices have taken the online maker community in particular by storm, providing PC functionality to a plethora of open-source projects in amazingly compact, cost-effective, and low-power platforms.
It’s not an overstatement to say these tiny computers have engendered a technological revolution of their own by pushing the limits of technological creativity achievable in the palm of one’s hand. As an added benefit, SBCs have served as cheaply obtainable educational tools for teaching the ever-important concepts of computer science to the younger generation. Test engineers, those seeking to build one-off projects, and hobbyists have embraced, and appreciate, this mini computer platform. Similar to how the smartphone changed how we use phones, SBCs are poised to change how we approach embedded systems development. 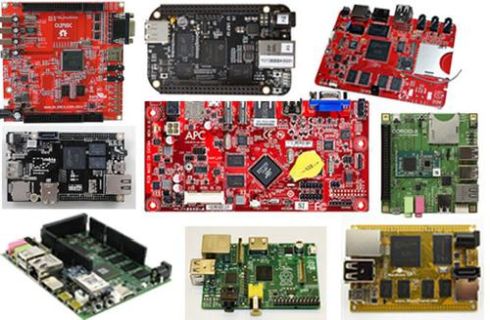 The following slideshow introduces a series of some of the most unique SBCs that have hit the market to date—all which can be purchased for under (or very nearly) $100.

First up on the SBC roundup is none other than the Raspberry Pi. This credit-card-sized device was originally developed by the Raspberry Pi Foundation (UK) to promote a simple and cost effective way of teaching basic computer science concepts in schools. Since its inception, the Linux-based Pi has become the foundation of several DIY project builds for mobile PC applications. These include projects such as pocket-sized media streaming, LED display boards, environmental sensing devices, Pi-powered cat feeders, and many more.

Read More: The biggest-little revolution 10 single-board computers for under