Back in November 2012, EDN Brand Director Patrick Mannion published a teardown of a cell-phone battery charger. The design was not well done and received bad reviews. Redemption! I recently acquired a Mophie juice pack power station mini smartphone and USB-device battery charger that not only negates the previous teardown fiasco but also demonstrates the ability to provide more than twice the battery life to your smartphone while still keeping a low-profile shape that slips right into your pocket.
Mophie, a California-based designer and manufacturer of mobile intelligent devices and accessories, developed the juice pack, the first ever “Works with iPhone” portable battery case certified by Apple. I contacted the company via e-mail for its help clarifying this design as well as the component types. It has not yet responded, so I give you my educated guesses. EDN readers are encouraged to weigh in with their own thoughts and expertise.
1. The micro USB and standard USB ports on the side of the case were quite secure. I tested them many, many times, inserting and extracting the connectors from the supplied cable.
2. I think a Microchip MCU is located under the shield shown. The microcontroller usually controls the housekeeping; provides charge control for the USB battery-charger IC, IC1; controls the four LEDs for the charge-status indicator; has I2C bus capability if needed for IC1; and controls the power MOSFETs. The Microchip part is unusual for a few reasons. It appears to have a Microchip symbol and only a date code, with no sign of a part number. There are eight pins on two sides opposing one another. On the other two sides are what look like eight pins—six of the eight are cut off and two are connected to the PCB, on each opposing side. Sometimes manufacturers provide early samples of a new die not yet fully qualified in a nonstandard package, but I am not sure. 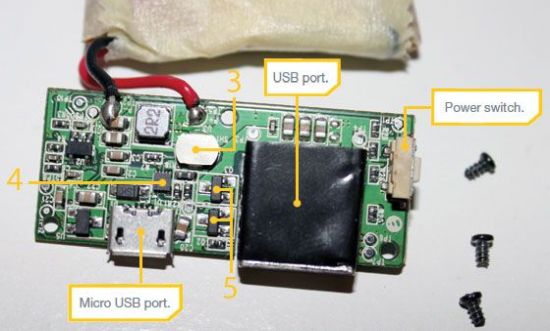 3. The boost-converter IC is located under the shield shown and needs to be close to its inductor. The function of this IC is to take the battery output voltage and convert it to 5 or 5.1V to the Mophie USB port through the MOSFETs when it be comes a host to charge an external device. Its output capability is probably around 1A. This IC has two sets of five pins on opposing sides. The other two opposing sides have some sort of heat-sinking pins, which are soldered to the board, possibly indicating internal power MOSFETs.
Read More: Teardown: Cell-phone charger: nice idea done right