A recent eBay fishing expedition yielded an interesting little part for the very reasonable sum of about five pounds. It’s a voltage regulator module from a Dell PowerEdge 6650 Xeon server.
I originally bought this because I had the idea of salvaging parts from it to use in another project. These are high quality modules that will have very good inductors and sometimes an array of high value ceramic capacitors that could be re-used (ceramics of at least 22µF at 16V and above are rather pricey at the moment). So the VRM arrived and I was rather impressed with the build quality and decided to have a go at reverse engineering it. 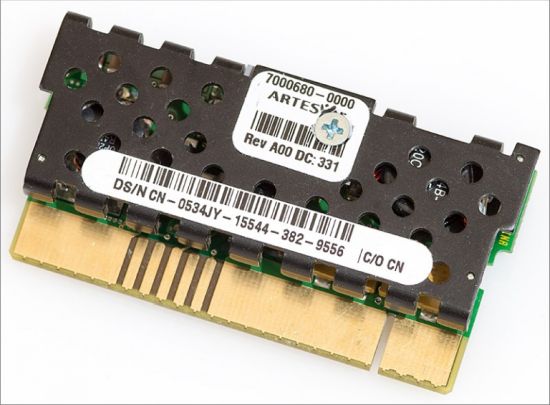 The board is at least 2 layers and I’m betting that the topology is a switching buck converter. If I peek under that big heat sink I can see a large inductor, a smaller inductor, Fairchild FDP7030L and FDB7030L power MOSFETs, a bank of ceramic and a bank of tantalum capacitors. Basically all the components you need for the power section of a buck converter. The inductors are Coil tronics UP2B-R47 and UP4B-1R5, both with maximum current ratings in excess of 10A. There’s also a MIC4420BM MOSFET driver with a peak current rating of 6A which gives us a clue as to the output current limit of this board.
The FDP7030L power MOSFET is screwed to the heat sink so I thought it’d be easy to get the heat sink off by just removing that screw. Not so. There are a number of ‘posts’ that prop the heat sink up into position and I just couldn’t get these to budge without risking damage to the part.
They’re soldered to the board and fixed somehow to the heat sink. My attempts at DE soldering failed probably due to the heat that I applied being wicked straight up the post into the heat sink itself. I don’t want to damage this board so I’m afraid you’ll have to make do with some shots from around the sides where I can see under the heat sink.
Read More: Reverse engineering a server CPU voltage regulator module