Nuremberg, Germany and San Jose, California, February 26, 2013 – NXP Semiconductors (NASDAQ: NXPI) today announced that it is delivering evaluation samples of the LPC810 and LPC812 microcontrollers via major distributors. The LPC800 series microcontrollers build upon NXP’s strong ARM® Cortex™-M0 portfolio, which currently exceeds 80 different available parts, and are the first products in NXP’s growing Cortex-M0+ roadmap. In addition, NXP announced the LPC800-MAX – an mbed/Arduino development board based on the LPC812 – which will be released in April 2013. 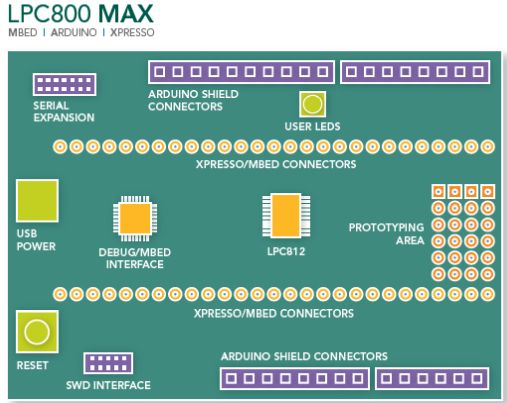 LPCXpresso development boards featuring the NXP LPC812, based on the Cortex-M0+ processor, will be featured at major distributor booths at Embedded World 2013 in Nuremberg, Germany this week, along with other NXP Cortex-M development boards.
“The LPC800 provides a simple yet compelling entry point for our LPC Go microcontroller family, with innovative peripherals such as the flexible switch matrix and a very attractive price. The positive customer response we’ve received so far has been overwhelming,” said Mario Klein, regional marketing director for EMEA, microcontroller business line, NXP Semiconductors. “Together with our LPC1100 series based on the Cortex-M0, NXP’s portfolio of entry-level microcontrollers is unmatched in terms of the track record, breadth and variety of options they offer to our customers.”

NXP is also working with key partners to develop LPC800-MAX, a development board which combines mbed, LPCXpresso and Arduino connectivity, allowing users to choose and work with their favorite elements from each environment. The breakthrough interoperability of the LPC800-MAX development board is made possible thanks to the unique flexible switch matrix feature introduced in the LPC800 family of microcontrollers, which allows users to configure nearly any pin for any available function. Further, with the new mbed USB onboard interface, users can choose if they want to use cloud-based mbed tools for development, or if they would rather use an off-line tool chain, such as the LPCXpresso IDE, for development and debugging. The board will be available in April for a suggested retail price of € 16.00.
“The LPC800-MAX development board from NXP will open a new world of possibilities, as it allows users to pick the parts they like from the mbed, LPCXpresso as well as the Arduino eco-systems, and use them together or however they choose,” said Henrik Flo dell, tools and embedded ecosystem manager, NXP Semiconductors. “Whether you’re an enthusiast, a maker with a creative project idea, or a professional developer working on a commercial product design, the LPC800-MAX board provides flexibility and access to best-in-class tools, as well as strong community support around the world.”
Read More: NXP LPC800 Development Boards Now Available from Distributors