Scientists at the Ulsan National Institute of Science and Technology have developed a thermoelectric coating that can be directly painted onto any surface to turn it into thermal generator. This new technique can be used to convert waste heat into electricity from objects of almost any shape.
The team created an inorganic thermoelectric paint that possesses liquid-like properties using Bi2Te3 (bismuth telluride) and Sb2Te3 (antimony telluride) particles. These newly developed materials are both shape-engineer able and geometrically compatible so they can be directly brush-painted on almost any surface.
To test the new materials results, the researchers painted alternate p-type and n-type layers of the thermoelectric semiconductor paint on a metal dome, which generates about 4 mW output power per square centimeter.
Compared with some flexible thermoelectric generators, such as KAIST’s wearable device and Northwestern University’s thermoelectric material, the generated power of UNIST materials is just 10% of others, but the most important advantage is that it can be applied on any surface with just a paintbrush. 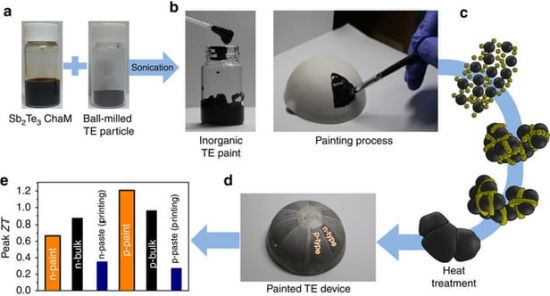 The UNIST researchers aim to see their invention as a renewable energy source, which will be possible to convert heat and cold to electricity by simply painting the external surfaces of buildings, on roofs, and on the exterior of cars, and open the way to many other materials and devices easily transferred to many other voltage-generation applications.

“Our thermoelectric material can be applied any heat source regardless of its shape, type and size.” said Professor Son. “It will place itself as a new type of new and renewable energy generating system.”