We discover in this article the flexible system clock of the AVR X Mega A4U that remember to be very similar to other X Mega and let’s see how to configure it with ease thanks to the ASF module Clock Control System we have added to our project and analyzed in previous episodes.
For those wishing to download the Atmel Studio project created so far: progetto_introduzione_ASF_3
As mentioned in the previous article, after the reset (and when) the device will start the internal oscillator from 2 MHz then you can change at runtime through our various firmware system clock.
Let’s see a schema based on the datasheet of the microcontroller that summarizes well what we offer for the clock:
Initially you may be frightened by the many Options and acronyms, a question often asked by newcomers is “but not just a simple General clock?”
The microcontroller has many devices that typically work at different speeds from the CPU:
-the Brown-out that detects any cali when the power reset and Watchdog Timer that allows the detection of firmware blocks working at 1 kHz tone generated from a clocked at 32 kHz
-Real-time counter (RTC) that allows you to keep track of the time typically works at 1024 kHz but can work with higher resolution (greater than 1ms) to 32,768 kHz 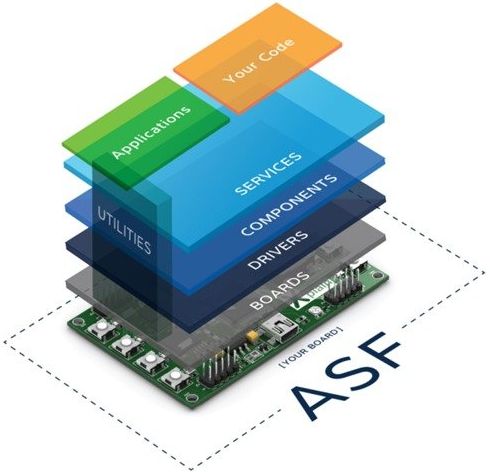 – USB module requires a minimum clock speed of 6 MHz for working in low speed and at least 48 MHz to full speed mode
-the devices as the DMA controller, event system, interrupt controller and RAM have a clock set called clkPER
-the EBI (External Bus Interface) used to connect external memory such as SRAM and SDRAM or devices such as LCD display memory mapped working on a clkPER2 clocks up to twice as much to devices. The module is only present on some package, generally with a large number of pins, is not present on our Development Board ATXMega32A4U EWS.
Read More: New blog about Atmel MCU and Atmel Software framework