While building my custom Home Automation system for my apartment I already designed some actuators in the form of my RGBW Controller. Several of these control the lighting in some of my rooms. To “intelligently” use your actuators (e.g. light, power, …) you need to collect some information first though. To do this I designed a MySensor based platform that can be connected to most of the available cheap sensor, digital and analog ones alike.

Some parts of my design are based on the Sensebender Micro and the Slim Battery node project. Both of them are great, but both of them had some “problems”. One has no housing (and doesn’t fit in most of the good ones I found), and the other has a housing but needs a lot of manual work to build. So I designed my own one which should be:

The node is based on an at mega 328P and the NRF24L01+. It supports signing by integrating an ATSHA204A and has an software controlled led onboard (for low power usage). Serial connection for debugging and a 6 pin ISP connection for programming can be added. The cases used are these from aliexpress but other should work too.

The board also includes all the needed capacitors and various options for powering the node: 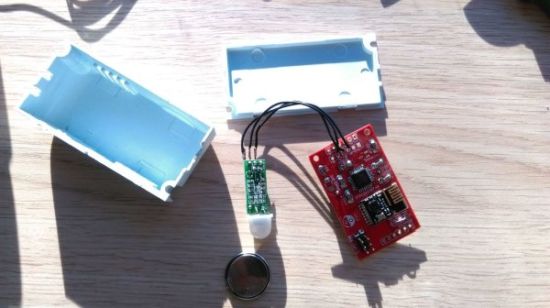 I have added 2 6-pin connector rows to the board that breakout all the pins needed for all sensors I could think of. They include

I am running the nodes on 3.3V and 8MHz so you can use the arduino pro mini settings from the arduino ide if you want. I added some settings that also reduce BOD to 1.8V:

Currently I have written software for a temperature/humidity sensor, a motion detector and a soil humidity sensor. The code for them can be found in my git hub repo but you could run pretty much every code from the my sensor forum too.

Update: I have just added a new sensor type using a LDR to measure the light level. I am using this in my controller to automatically turn on the lights once it gets darker. Code and pictures can be found here.
Read More: A Multi-Use Mini Sensor Platform