The Internet-of-Things Power Meter (IPM) is a device fixed on top of the regular household power meter that provides detailed information about the electricity usage. Modern power meters have a LED blinking every time a watt-hour is used, the IPM detects these flashes using a light sensor, counts them, saves the values to an SD card. Later the data is stored to the cloud.
Usually power companies provide very rough electricity usage data, the IPM provides data with a minute resolution. Knowing the household electricity usage allows to extrapolate statistics and can give precise numbers about the costs. 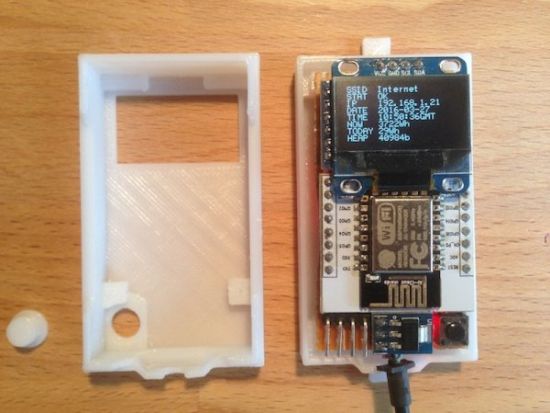 The IPM was made with simplicity of assembly and cost in mind. The device is easy to build, program and cheap to deploy and use. One can basically buy the parts, assemble, program and deploy it without any knowledge about the inner workings, however contribution to the development of this open-source project is welcome and encouraged.

One of the goals of the IPM is to sensibilise people to their power consumption via providing information on how much and when it is used, as lowering ones power usage is just as effective in mitigating the worldwide energy issues as creating new renewable ways to produce it.
After the first version of my IoT project measuring my power consumption I wanted a better finished project that had a higher resolution (minutes instead of hours), local storage and a server that could be accessed to see live power usage.
I also wanted a cheap project that could be easy to source and build. The IPM is open-source and documented in a way that anybody can assemble one and program it. The total cost is about $20, the complete bill of materials is available with links to source each component.
Read More: Internet-of-Things Power Meter