Here is a really small side project that I developed while working on something else…
I had to test a RC speed controller that I wanted to use to control an electric car window motor, and for the 100th time I was facing the same dilemma: find 8 batteries for my remote control, dismount the RX part from the quad copter and use that, OR grab the Arduino and write quickly some code to generate the corresponding signals ? Neither of which was actually particularly handy…
So I finally decided to build a small stand alone servo tester :
The hard part was to avoid trying to squeeze too many features in it, as I kept thinking that having an LCD screen showing the exact pulse width in microsecs would be useful, etc. ….
I finally managed to convince myself that “less is more” and the final design simply has a micro-controller (what else than the trustworthy AtTiny85 !?  🙂 )  and a big knob (that I salvaged from a radio). 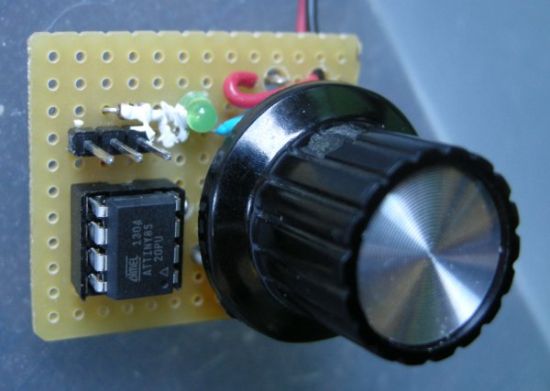 Here’s some sort of schema, though that’s probably an overstatement
A, yes, sorry there is also a small capacitor to avoid noise from the motor affecting the MCU (see the lesson I’ve learned here, the HARD way !) and a LED, to give some basic visual feedback, at least when the device is operating.
Read More: DIY servo tester based on ATTiny85