This project is intended to perform the role of a goal-keeper in the popular arcade game Air Hockey. In this project, the robot shown below senses a puck coming toward it and moves in the direction of the puck’s motion so as to stop it. This problem was identified as fairly challenging to solve based on two metrics. Firstly, Air Hockey is fast paced and designing a highly responsive control system seemed exciting. Secondly, most prior solutions to this problem have been attempted with robot arms that are vastly greater in cost than the solution presented in this project. 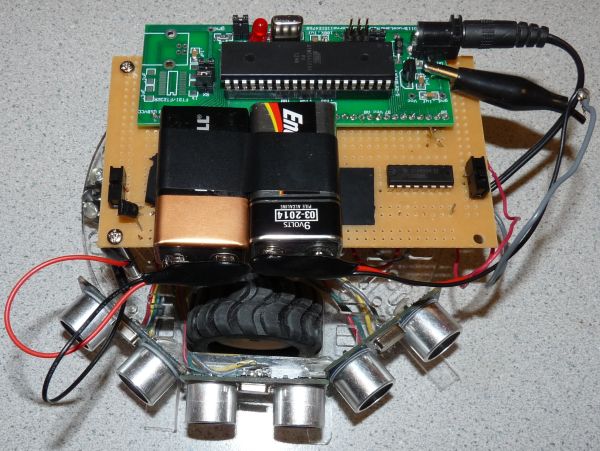 The robot is designed to be an autonomous entity, in that it is battery powered and does not require human input to locate a moving puck in a game of Air Hockey. So as to behave optimally, the robot is most likely to lurk around the region near the goal rather than move end to end while tracking the puck. This is due to an optimization in sensing distance that we felt necessary to introduce in the sensing mechanism of the robot as discussed in the Hardware section. Overall, the robot performed well in the absence of a lot of noise from other sensors in the environment. Even so, owing to the nature of the sensing, i.e. sensing planar sound waves with ultrasonic sensors, there was notable loss of sensitivity in sensing. This was improved by altering the geometry of the puck as shown in the Pictures section.
Shown below is an illustration of the system as a whole. The ATMEGA 1284 MCU takes in echo patterns from each of the sensors, interprets them and accordingly actuates the robots motors.

The hardware employed in the project spans some fairly basic elements, each of which will be described in detail. A listing of the components includes:

The system can be broken into two main subsytems – sensing and actuation. The sensing subsystem takes in inputs from its surrounding and interrupts the microcontroller when it senses a moving puck. The 1284P microcontroller (MCU) then uses this interrupt to signal the acutation subsystem to move the robot in the appropriate direction as required.

As shown below in Figure 1, the Sensing subsytem is comprised of the MCU receiving inputs from 3 ultrasonic sensors.

The left ultrasonic sensor works to actuate the robot to the left depending on whether the puck is in its echo path or not. This can quantifiably be noticed in the echo pattern (See Results Section) delivered by the ultrasonic to the MCU as every pulse-width in the echo narrows as the ultrasonic notices the puck in its path and widens as it notices the absence of anything in its path. Experimental results helped to generate a threshold of a 3ms echo pulse meaning the absence of a puck. These observations were made by scoping the echo pattern of each sensor while plugged into a white-board. As shown in the Results section, each scope image represents an echo pattern for a distance of 5cm, 10 cm, 20 cm, 30 cm and more than 30 cm away from the sensor respectively. The last scope image, therefore, effectively represents nothing detected by the sensor; hence the noticeably large pulse-width and our conclusion to use 3ms as a threshold for detecting or not detecting a puck. The same logic applies to the right and center sensors, the scope images of which are almost identical to those in shown in the Results section. Although the center ultrasonic operates the same way as the left and right sensors, its functionality in the robot is analogous to that of a brake in a car. The exact place of this is described below and shows the logic behind the V-Shaped sensor setup of Figure 2. The V-Shape was deemed optimal as it fit and amply satisfied several scenarios below: 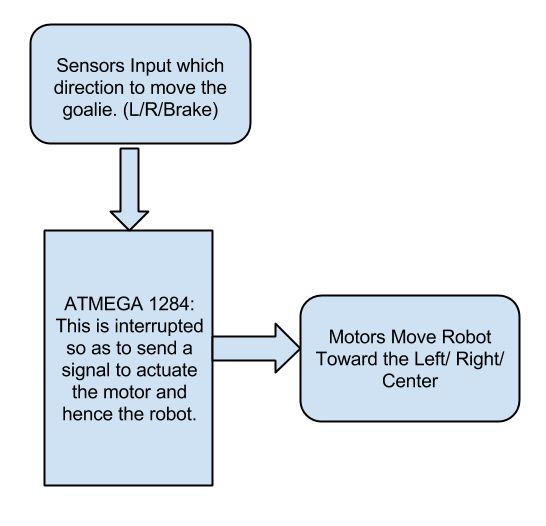 To sum up this section, it would seem useful to talk about why the HCSR-04 (See Figure 3) and more importantly, why ultrasonic sensors, were chosen as a sensing mechanism for this project. The HCSR-04 was picked through a process of elimination and after carefully going through every alternate sensing mechanism available to us. This included Infra-red, lasers as well as better ultrasonic sensors. Initially it was posited that the use of lasers would provide the most accurate sensing data for a moving object, i.e. the puck, to feed data (in the form of a stable interrupt) to our MCU. However, there were several issues with this. To begin with, we were constrained by a tight budget and employing a set of three laser emitter and receiver pairs was deemed too expensive given that we required quick and responsive DC motors to actuate the robot in the direction of the puck; these motors represented a fixed and relatively high expense in themselves. We then moved on to infra-red, but given our inability to deploy this effectively in lab, we decided to scrap this idea. Finally, after looking at several ultrasonic sensors and their datasheets online, we decided to settle on the HCSR-04 as it had the range we needed to operate within and was fairly inexpensive as well. Even so, apart from this, the HCSR-04 represents a very flexible mode to sensing, allowing the opportunity for a designer to easily vary the range of the sensor based on how long and how often the trigger signal is applied to it. This represents some clear benefits given that this sensor can thereby be mounted on chassis of varying heights as it has a fairly wide angle of 15 degrees to receive the echoes of the signals it sends out.