Skip to content
The latest buzz in the information technology industry regards “the Internet of things”—the idea that vehicles, appliances, civil-engineering structures, manufacturing equipment, and even livestock would have their own embedded sensors that report information directly to networked servers, aiding with maintenance and the coordination of tasks.
Realizing that vision, however, will require extremely low-power sensors that can run for months without battery changes—or, even better, that can extract energy from the environment to recharge.
Last week, at the Symposia on VLSI Technology and Circuits, MIT researchers presented a new power converter chip that can harvest more than 80 percent of the energy trickling into it, even at the extremely low power levels characteristic of tiny solar cells. Previous experimental ultralow-power converters had efficiencies of only 40 or 50 percent.
Moreover, the researchers’ chip achieves those efficiency improvements while assuming additional responsibilities. Where its predecessors could use a solar cell to either charge a battery or directly power a device, this new chip can do both, and it can power the device directly from the battery. 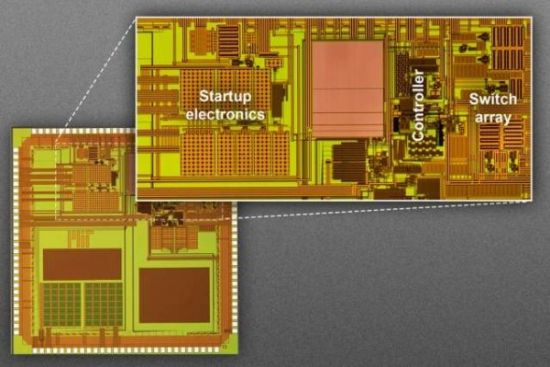 All of those operations also share a single inductor—the chip’s main electrical component—which saves on circuit board space but increases the circuit complexity even further. Nonetheless, the chip’s power consumption remains low.
“We still want to have battery-charging capability, and we still want to provide a regulated output voltage,” says Dina Reda El-Damak, an MIT graduate student in electrical engineering and computer science and first author on the new paper. “We need to regulate the input to extract the maximum power, and we really want to do all these tasks with inductor sharing and see which operational mode is the best. And we want to do it without compromising the performance, at very limited input power levels—10 nano watts to 1 microwatt—for the Internet of things.”
The prototype chip was manufactured through the Taiwan Semiconductor Manufacturing Company’s University Shuttle Program.
Ups and downs
The circuit’s chief function is to regulate the voltages between the solar cell, the battery, and the device the cell is powering. If the battery operates for too long at a voltage that’s either too high or too low, for instance, its chemical reactants break down, and it loses the ability to hold a charge.
Read More: Ultralow-power circuit improves efficiency of energy harvesting to more than 80 percent