Wouldn’t it be nice to have an internet-connected alarm clock that automatically sets itself, based on your calendar? You would never miss an early appointment, never forget to set your alarm, and enjoy more restful sleep knowing you’ve solved the nightmare of regulating your alarms. An internet-savvy alarm clock could even watch your inbox and wake you up if friends or family send you an important email.
This S.M.A.R.T. Alarm Clock (Setup for Meetings, Appointments, Reminders, and Tasks) uses the Arduino Yun, which is a special Arduino with two processors. One processor runs an embedded version of Linux and is connected to the internet over Wi-Fi or Ethernet. The other processor uses the same chip as the Arduino Leonardo microcontroller, allowing the Yun to work with most Arduino shields and accessories. By using the Arduino Yun, this project can talk to complex web services with the Linux processor, and interface with hardware — an LCD touchscreen — on the second processor. 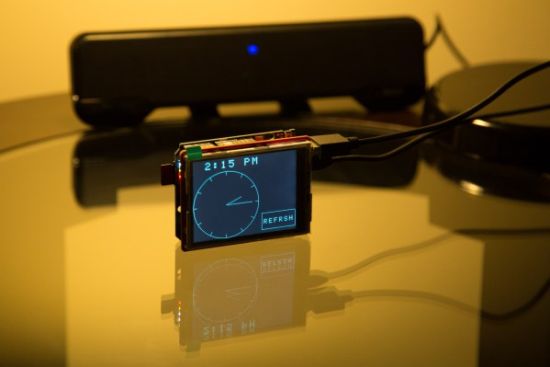 The software for the S.M.A.R.T. Alarm Clock uses the Temboo service to communicate with calendar and mail utilities. Tambo is a platform for simplifying access to many web services, and it has great support for the Arduino Yun. To build this project you’ll need to sign up for a free account on Tambo’s website.
S.M.A.R.T. Alarm Clock currently works with Google’s Calendar and Gmail services. If you don’t have a Google account, make sure to sign up before starting the project.
In addition to those accounts, you need only an Arduino Yun with power adapter, micro SD card, TFT touchscreen Arduino shield, and a USB speaker. The TFT shield will display the clock interface, while the USB speaker will play the alarm. Make sure to use a USB speaker that receives both power and audio over the USB connection, such as RadioShack #40-380. (some speakers send audio over a separate cable which won’t work with the Yun). The project software includes an annoying alarm clock sound that will jolt you awake, but you can substitute your own MP3 to wake up to something more pleasant.
If you’re new to the Yun, take a moment to read this guide and watch this setup video. You’ll want to make sure your Yun is connected to your wireless (or wired) network and has access to the internet before starting this project. Also, connect the micro SD card to the Yun before it’s powered on, so it will mount the card as a root for storing the data used by this project.
Read More: S.M.A.R.T. Alarm Clock