RF dui no In The News:

The RF dui no has Bluetooth 4.0 Low Energy built-in, which enables it to wirelessly talk to any smartphone that has Bluetooth 4.0.
Currently we have several open source apps built for the iPhone which were used in our demos.  Open source Android apps are next.
The RF dui no has a Nordic 32 bit ARM Cortex-M0 processor, so it has more power then the UNO, however it still runs the same, simple Arduino code the UNO runs, so there is no need to learn any new programming language or environment.  Your standard Arduino sketches run on the RF dui no.
The RF dui no GPIO lines all support, Digital IO, Analog ADC, SPI, I2C, UART and PWM.  There are 7 GPIO and fully software selectable and can be remapped as you wish.
The RF dui no is similar to the Arduino UNO or DUE, except the RF dui no is a fraction of the cost and size, in addition has wireless smartphone connectivity built-in! 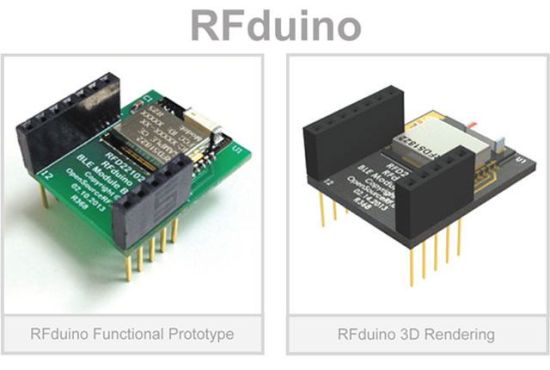 Up to now, adding wireless to an Arduino required an additional wireless shield which adds cost and size.  The RF dui no has wireless built-in, so there is no need for an additional wireless shield.
The ultra small, finger-tip size board shown in video cover picture above has been put into an easy to use DIP form factor with 0.100″ (2.54mm) pins, so it easily plugs directly into your solder less breadboards.