3D printing a battery itself is a remarkable achievement. A 3D printing a battery as small as a grain of sand is a giant hurdle forward in both, 3D printing and battery technologies. That is exactly what researchers working at University of Illinois and Harvard have done. To achieve this process the researchers had to create their own custom 3D printing technology. Although there are many types of materials 3D printers can use, most print objects using small liquid droplets, which build upon one another to create the object from the bottom up. For the researchers this process was not sufficient to achieve their goals. Therefore, they designed a 0.03mm nozzle, which releases the liquid materials continuously in a fashion, which is similar to toothpaste being squeezed from its tube. In addition, the researchers also invented a 3D printing material that is electrochemically active, which ultimately allowed the printed battery to store and release charges.
The battery was printed into the shape of a comb structure, which allows the anodes and cathodes to sit in an alternating pattern. Furthermore, the researchers then submerged the electrodes in an electrolyte solution to finalize the battery. According to the Shen Dillon, co-author and an assistant Professor of Materials Science and Engineering at the University of Illinois, “The electromechanical performance is comparable to commercial batteries in terms of charge and discharge rate, cycle life, and energy densities.” 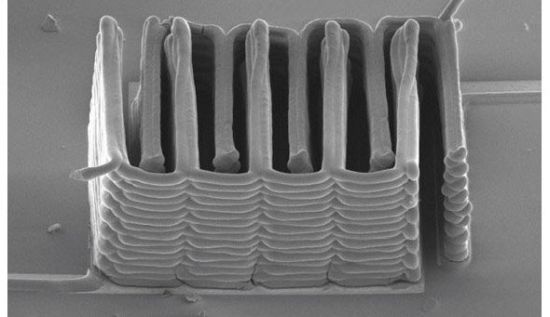 “Not only did we demonstrate for the first time that we can 3D-print a battery, we demonstrated it in the most vigorous way,” commented senior author Jennifer Lewis from Harvard. The teams also has future plans for possible applications for the micro-batteries. One of those applications is Harvard’s Robobee. The bee is a tiny robot, which is capable of impersonating real bees. Using it researchers hope to investigate pollination and declining bee populations. “The idea to be able to integrate small power sources directly onto those kids of robotic insects would be powerful and enabling. Right now, everything is tethered to an electric power source. It would be very nice to have that.”
Read More: Micro-battery is 3D printed