College physics lab we got to use these variable resistance ‘boxes’. They had two inputs and six dials, and could generate one million different resistances across the two inputs. I knew I had to have one, and why not make it myself? This tutorial demonstrates how to build one for yourself for pretty cheap. 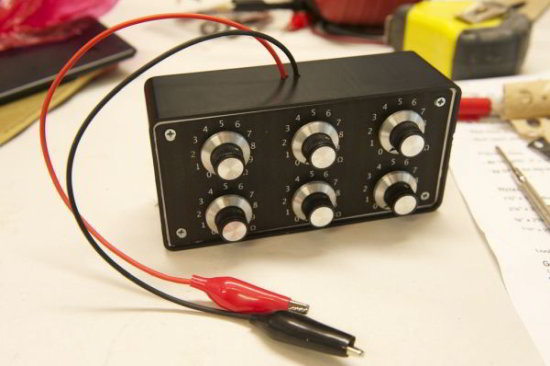 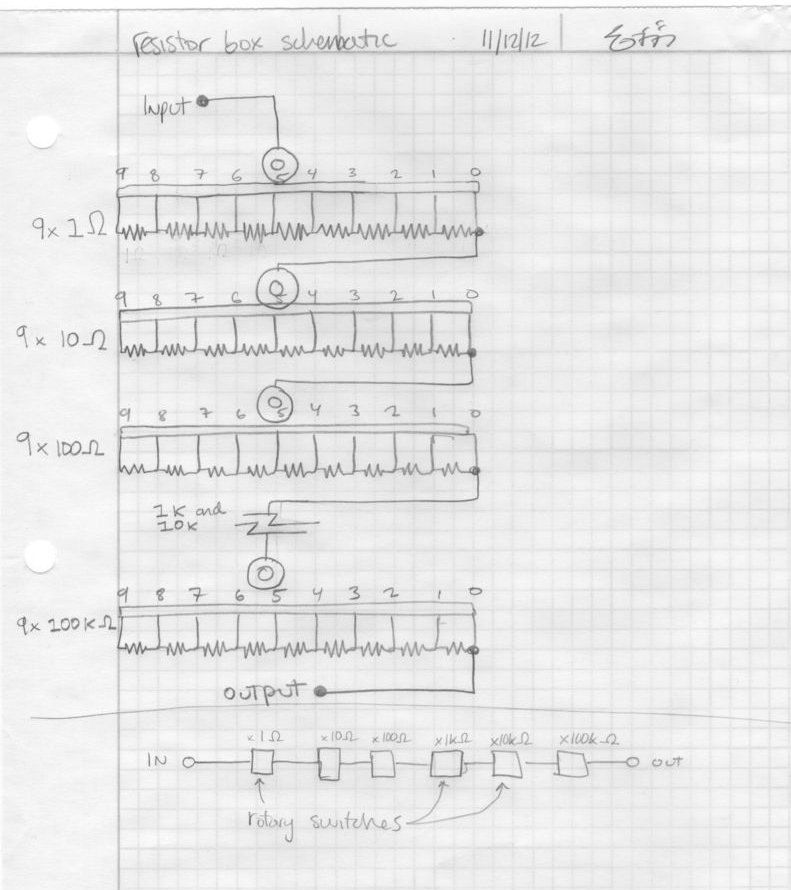 As described in the previous step, each of the six rotary switches needs 9 resistors, so you will need 9 each of 1 Ω, 10 Ω, 100 Ω, 1k Ω, and 10k Ω, and 10 of the 100k Ω.Choose any terminal to be the ‘0’ position, and solder a resistor across that terminal and the one next to it on the clockwise side if you’re looking at the switch with the knob pointing at you. This is so your numbers will be increasing in clockwise order (which is how basically all knobs are set up I think).Procede to solder on 8 more resistors of the same resistance, so you have 9 total (if you are making the highest-order switch, solder on 9 more so you have 10 total). The last terminal you solder to will be your ‘9’ position.
I would wait until you’ve assembled the box before you daisy chain your switches together. This will just make assembly easier.

In order to actually see which resistance you are setting, I’d recommend labeling the lid of your box. One possibility is labeling each knob with “x1Ω”, “x10Ω”, etc., to indicate each knob’s capability of selecting a multiple of said resistance. Also, make sure to add tick marks with numbers going from 0-9 around each dial.
This is also the time to figure out how you want to orient your knobs on the box lid. I’m doing a 2×3 pattern, but it may be different for you depending on the size/shape of the project box you bought.
Before you finalize you label, make sure the switches will actually have enough clearance to fit! Check to be sure they don’t conflict with each other or the sides and bottom of the box when they are spaced according to your label layout.
I made the label on photo shop and printed it out on sticky back label paper. I’ve included the file if you’d like to use it. (Also, laser cutting a custom acrylic box top would be really cool too).
A note on the label included: The dimensions of the box lid are 3 x 6, but I made the dimensions of the label slightly smaller because  there is a bevel around the edges of the lid, and I didn’t want the label ‘overhanding’ on the bevel. So, if you use this label, make sure to print it out so the dimensions are 2.75 x 5.75 inches. This way, the label will stop right at the edge of the flat part of the box top and the bevel.