The circuit in Figure 1 lets you switch high-voltage power to a grounded load with a low-voltage control signal. The circuit also functions as a sub microsecond circuit breaker that protects the power source against load faults. Power switches to the load when you apply a logic-level signal to the output control terminal.

circuit When the signal is lower than 0.7V, transistor Q3 is off and the gate of P-channel MOSFET Q4 pulls up to the positive supply through R6, thus holding Q4 off. During this off condition, the circuit’s quiescent-current drain is 0A.

Under normal load conditions, the sense voltage developed across R3 is too small to bias Q1 on; thus, Q1 and Q2 are both off. If, however, the load current increases, the voltage across R3 may become large enough to turn on Q1. At that point, base current flows through R4 to Q1, and Q1’s collector current in turn provides base current for Q2. As Q2 turns on, it provides extra base drive for Q1, and the two transistors rapidly latch in the on-state. 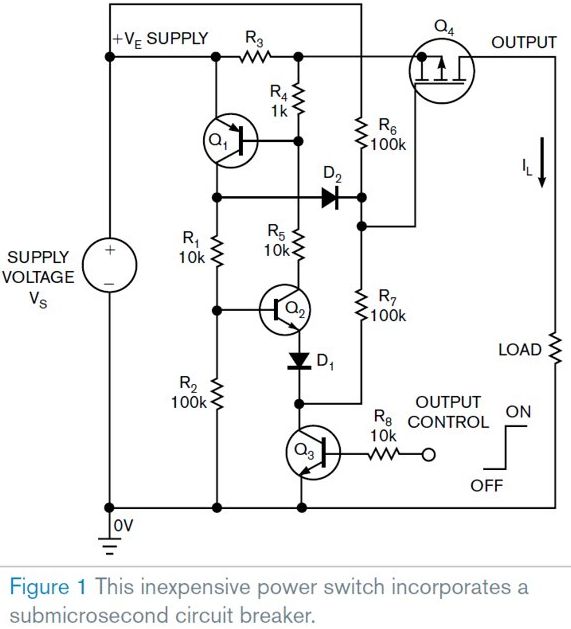 With Q1 saturated, its collector pulls D2’s anode to the positive supply, which clamps Q4’s gate voltage to a diode drop below VS. Without gate drive, the MOSFET turns off, and IL falls to 0A. With Q1 and Q2 both latched on, Q4 remains off, which protects the power source from excessive load currents. You can reset the circuit breaker simply by taking the control signal low or by cycling the power. The resistance values in Figure 1 are suitable for operation at supply voltages of 20 to 30V. Assuming that the transistors are suitably rated, the circuit can operate at much higher voltages, but you must scale the resistor values accordingly.