An adventure of the Southern Appalachian Space Agency, by Travis Good speed <travis at radiantmachines.com>, as presented at Summercon 2013, inspired by the lectures of Adam Laurie and Jim Geovedi, with kind assistance from Sky tee.
At Black Hat DC in 2008, I watched Adam Laurie present a tool for mapping Ku-band satellite downlinks, which he has since rewritten as Satmap. His technique involves using an DVB-S card in a Linux computer as a receiver through a 90cm Ku-band dish with fixed elevation and a DiSEqC motor for azimuth motion. It was among the most inspirational talks I’d ever seen, and I had a blast recreating his setup and scanning the friendly skies. However, such a rig is limited to geostationary satellites in a small region of the sky; I wanted to see the whole sky, especially the moving targets. 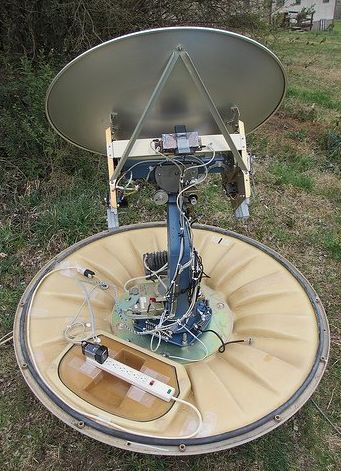 In this article, I’ll demonstrate a method for modifying a naval telecommunications dish to track moving targets in the sky, such as those in Low Earth Orbit. My dish happily sits in Tennessee, while I direct it using my laptop or cellphone here in Europe. It can also run unattended, tracking moving targets and looking for downlink channels.
The Hardware
This is my dish, originally a Felcom 82B from Furuno, intended as a mobile earth station on maritime vessels. It would connect to one of the Inmarsat satellites in geostationary orbit, using mechanical gyroscopes to correct the dish against the ship’s movements. My use case is the opposite, trying to track moving targets from a stationary ground position.