This is a description of how I designed and built my UV exposure box. After experimenting a bit with dry-laminate photo-resist and liquid UV hardened solder mask I decided to stop trying to improve my toner transfer technique and rather build a proper UV radiation unit for making printed circuit boards.
I wanted it to be powerful and compact so I decided to use UV LEDs as the UV source. The preferred wavelength for the LEDs would probably be 365nm, but those LEDs turned out to be hard to find, and very expensive. The 395nm-405nm LEDs on the other hand are very inexpensive. And best of all, can be bough as high-density LED-strip’s on 5-meter rolls. So I bought two “5M Ultraviolet 395nm 3528 SMD LED” rolls that have 120 LEDs per meter for a total of 600 LEDs per roll. From what I could tell from a bit of googling the wavelength should work even though it is not ideal. Initial tests proved that the 395nm LEDs worked very well.
This page (and the unit itself) is still very much work in progress. The CAD files and firmware source code can be found in my github repository.

The UV exposure unit is controlled by an ATmega328P microcontroller and have the following features: 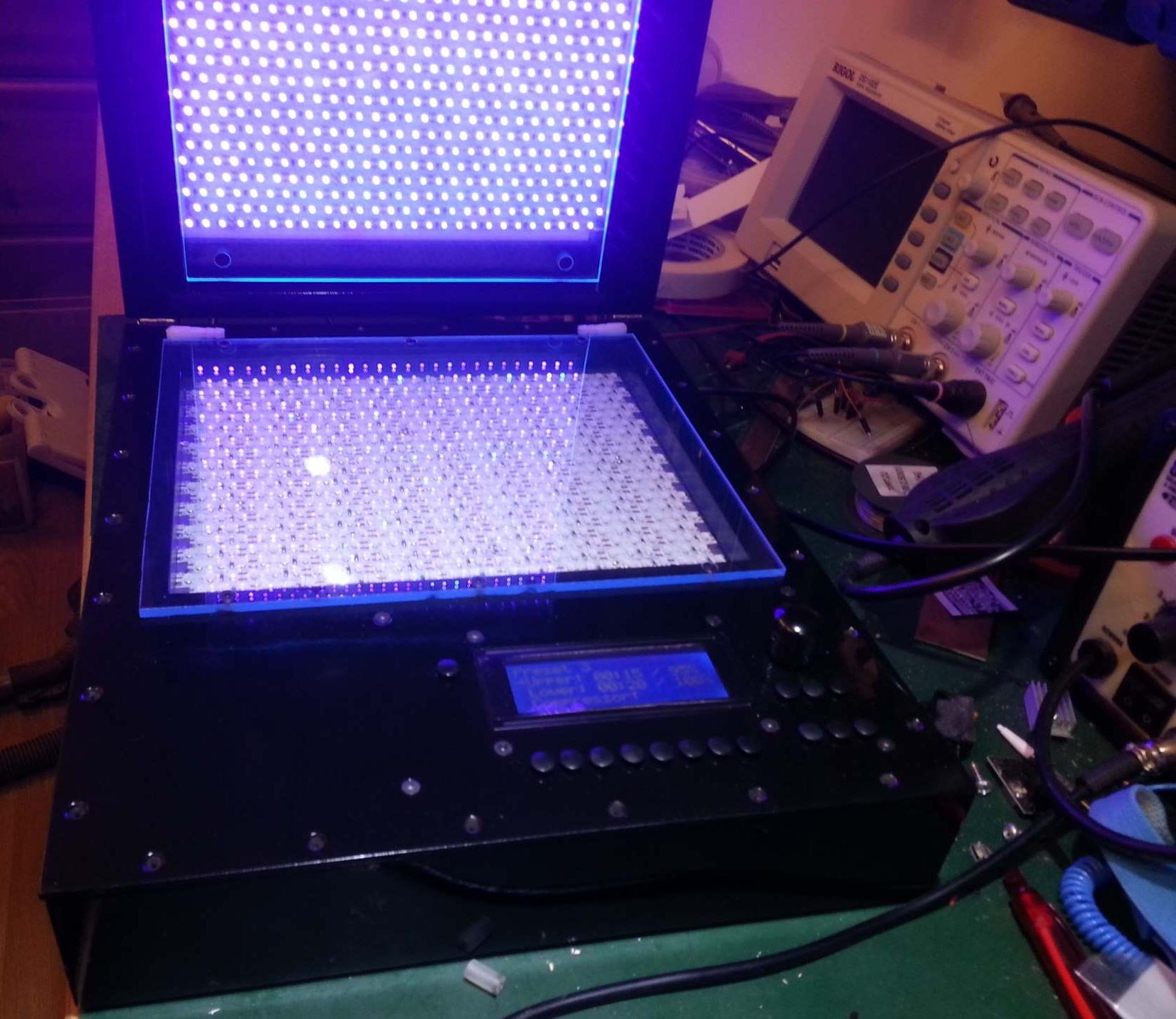 LED panel. As far as I could tell, this layout would give the most uniform light distribution.

I started by cutting two pieces of 0.7mm sheet steel and cover one side of each with a thin adhesive plastic film. The plastic film ensured that the power traces under the LED strips could not contact the steel. I then cut each LED roll into 22 pieces having 27 LEDs each. Then I glued 22 strips to the plastic film covering each steel plate. The strips was placed as tight as possible and with every second strip offset half a LED spacing to make the pattern as tight and uniform as possible.

After finishing the first panel I run a few exposure tests to make sure the 395nm light was at all able to activate the dry-film photo resist that I was planning to use. And the test results was very positive. My old method of exposing was a 36W fluorescent light nail curing machine. And with that one I had settled on 2 minutes exposure time. When calibrating the LED panel it turned out that the optimal exposure time was 6 seconds. So I guess that the higher efficiency of LEDs vs tubes was about 24 times more important than the wavelength difference between the two. At least for the dry-film photo resist.