Though I am a musician I don’t care for calling an expensive hi watt stereo my own. For years I have used a homebuilt stereo amplifier built around the TDA1554Q IC (basically just this chip in a nice box) and I am still very happy with the sound quality. This amp serves as a computer desk sound system, which acts as a radio/movie sound system as well.
In the meantime the number of sound sources that I want to connect to my “stereo”  has increased … suddenly there was a tablet that I use as an internet radio, a music player demon that runs on a raspberry pi and from time to time I want to listen to a podcast that I downloaded to my smartphone.
So a next-gen desktop stereo should have multiple inputs … about four of them would be nice. Also when watching TV on my computer from the bed I don’t want to get up all the time if I just want to adjust the volume. I’d like to do it digitally … maybe use my smart phone as a remote control?
Let’s summarize:
– 20 W stereo power amplifier
– 4 way audio in
– digital volume control interface

The amplifier section is trivial. You just buy a TDA1554Q, bolt it to the inside of an aluminum box, solder some resistors and capacities to the pins of the IC according to the application note in the datasheet and you have a small HiFi amplifier.
Because the volume control has to be digital, I’m using digital potentiometers. Sadly there are no (affordable) logarithmic dig pots available. However I found this method which employs a linear potentiometer in combination with a fixed resistor to “fake” a logarithmic potentiometer. 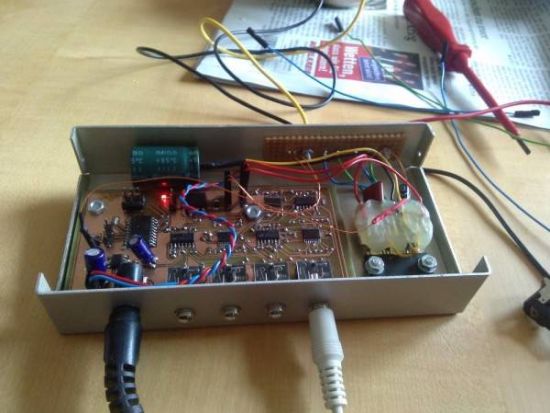 Figure 1
According to the article the the ratio between R1 and R2 has to be between 1:7 and 1:10 for best results. I made some calculations with octave and played around with the ratio. I found no reason against the 10:1 ratio.

Figure 2
It’s obvious that the voltage divider response is not exactly linear, but in the middle range it’s really pretty okay. So using a digipot + fixed resistor should do just fine for a volume control.