Back when I was developing the PSU burner, I wanted to have the Analog Discovery isolated from the common ground, to avoid noise and other issues. Since I did not have a way to do this, I ended up using a laptop on battery for measurements. But for long term, I needed to have this isolation. Unfortunately, things that can isolate USB at 480Mbps or faster are too expensive to justify.

The ADUM3160 isolator can provide a magnetically isolated 12 Mbps connection, which proved to be good enough. I grabbed one ready made isolator module from eBay for about $12, cheap enough. Well, it is not perfect: the B0505S DC/DC converter provided can only supply 1W and the Analog Discovery is a hungry beast.
Luckily, these DC/DC converters are cheap and I had some more in my parts bin.  Their internal structure allows them to be connected in parallel, so I used 3, which should cover the 2.5W needed. 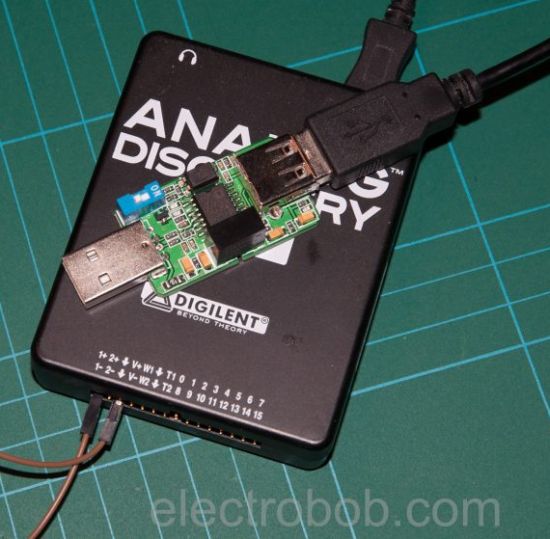 Next up, I had to upgrade the input fuse, to allow for higher current, my parts bin provided 0.65A one. Given the efficiency of the converters, this his slightly too small, so I would advice for a 0.9A one, the limit of USB 3 ports. Next up I have used an extra wire to connect the output of the DC/DC converter because the PCB trace was too small, dropping 0.3V on it already. Added an extra 470uF capacitor for decoupling, just to be sure.
The device works, but make sure to power it from a USB 3 or high current USB port, 0.5A classical is not enough. I am using a self powered USB hub.

I fired up Waveforms and set the signal generator to output a 1 MHz sine on a channel and used an oscilloscope channel to observe it. Luckily, the persistence mode does both a time count and a frame count, so I could use that as a method of USB performance. Without the isolator, I could do about 32 acquisitions per second.
With the isolator, the number dropped down to 9 per second. This is not so bad and using the thing without persistence in the normal oscilloscope only way does not show any perceived extra latency.
Read more: Analog Discovery USB isolation