An implantable, microchip-based device may soon replace the injections and pills now needed to treat chronic diseases: Earlier this month, MIT spinout Microchips Biotech partnered with a pharmaceutical giant to commercialize its wirelessly controlled, implantable, microchip-based devices that store and release drugs inside the body over many years.
Invented by Microchips Biotech co-founders Michael Cima, the David H. Koch Professor of Engineering, and Robert Langer, the David H. Koch Institute Professor, the microchips consist of hundreds of pinhead-sized reservoirs, each capped with a metal membrane, that store tiny doses of therapeutics or chemicals. An electric current delivered by the device removes the membrane, releasing a single dose. The device can be programmed wirelessly to release individual doses for up to 16 years to treat, for example, diabetes, cancer, multiple sclerosis, and osteoporosis.
Now Microchips Biotech will begin co-developing microchips with Teva Pharmaceutical, the world’s largest producer of generic drugs, to treat specific diseases, with licensing potential for other products. 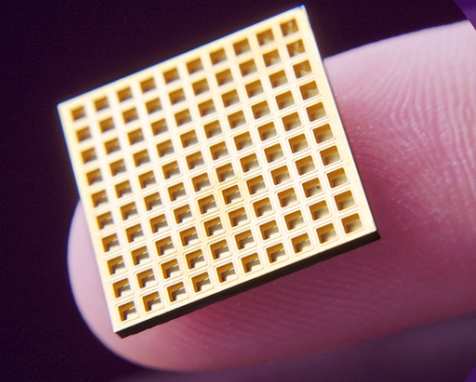 Teva paid $35 million up front, with additional milestone payments as the device goes through clinical trials before it hits the shelves.
“Obviously, this is a huge validation of the technology,” Cima says. “A major pharmaceutical company sees how this technology can further their efforts to help patients.”
Apart from providing convenience, Microchips Biotech says these microchips could also improve medication-prescription adherence — a surprisingly costly issue in the United States. A 2012 report published in the Annals of Internal Medicine estimated that Americans who don’t stick to prescriptions rack up $100 billion to $289 billion annually in unnecessary health care costs from additional hospital visits and other issues. Failure to follow prescriptions, the study also found, causes around 125,000 deaths annually and up to 10 percent of all hospitalizations.
While its first partnership is for treating chronic diseases, Microchips Biotech will continue work on its flagship product, a birth-control microchip, backed by the Bill and Melinda Gates Foundation, that releases contraceptives and can be turned on and off wirelessly.
Cima, who now serves on the Microchips Biotech board of directors with Langer, sees this hormone-releasing microchip as one of the first implantable “artificial organs” — because it acts as a gland. “A lot of the therapies are trying to chemically trick the endocrine systems,” Cima says. “We are doing that with this artificial organ we created.”