Switching DC/DC power supplies and regulators, regardless of whether IC, module, or chassis, are generally preferred over linear supplies, and with good reason. In general, they are much more efficient, resulting in reduced power use and cost, longer run time, and less heat to dissipate. (Note: There are cases where the linear supply may be more efficient, especially when the input/output voltage differential is small.¹)
However, there is a problem with switching supplies which affects many designs. Due to their inherent internal switching action, they generate more noise than linear supplies. The noise frequency is a function of the underlying switching frequency, which typically is between 100 kHz and several MHz, depending on design and application, and includes several harmonics.
In designs which are capturing low-level sensor signals, this noise may be unacceptable and additional filtering must be used to keep that noise out of the sensitive front end. In other designs, such as consumer products and autos, the noise is not a problem for the system’s performance itself, but the radiated noise as EMI means the unit will fail the relevant regulatory standards such as CISPR 252² [CISPR is an acronym from the French name for the IEC committee known in English as the International Special Committee on Radio Interference]. Yet, going back to a linear supply may not be acceptable for reasons of footprint, BOM cost, dissipation, or power use. 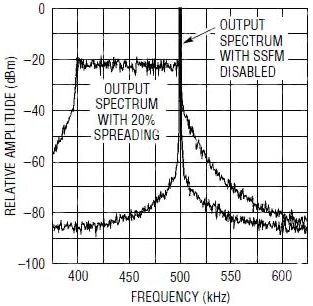 Fortunately, vendors of switching-supply control ICs have devised a way to minimize the noise problem. First, they are slowing and managing the slew rates and transitions of the converter clock and timing signals, to reduce some of the emissions. However, they have also gone further: some designs have adapted a technique used in communications spectrum management, encoding, and security to mitigate the noise problem. This spread-spectrum approach is the basis for frequency- and time-hopping systems used in devices where the user is not assigned a fixed frequency or time slot. Other designs use a triangle wave to modulate, and thus sweep the clock frequency across a modest range above and below the nominal value.
The problem and the principle

It is important to be clear about the basic parameters of EMI. The three basic factors are spectrum, energy, and amplitude:

When an EMI source, such as a switching converter, produces EMI energy, this energy leaves in two ways: by conduction along low-impedance paths (primarily via wires and PC board traces), and by radiation of electromagnetic energy through the air or vacuum. Often, the conducted EMI turns into radiated EMI, when the wires act as antennas.