A versatile kit that can be configured to drive either constant voltage LED arrays or constant current LEDs. Use the kit to dim under-cabinet LED lighting using flexible LED strips or build your own LED desk lamp using High Brightness LEDs.
The majority of the circuit is identical for both types of LEDs. Two inexpensive NPN transistors and a few resistors are added to the circuit for constant current LEDs. It uses the ability of a MOSFET transistor to act either as a digital switch or linear current regulator.
Constant voltage LED arrays include built-in current limiting resistors. Typically these arrays come in a flexible tape form (such as Jam eco part number 2128631) but may also be constructed from discrete LEDs and appropriate current limiting resistors (for example a string of 3 white LEDs wired in series with a 120 ohm resistor designed to operate at 20 mA with a 12 VDC power supply). 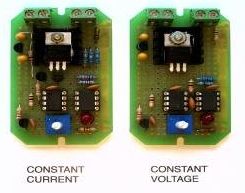 When configured to drive constant voltage LED arrays, the dimmer circuit acts as a digital switch that turns on and off hundreds or thousands of times per second to modulate the LED brightness.
Constant current LEDs do not have any built-in current limiting and depend on the dimmer circuit to limit the current. The dimmer circuit is configured to drive 1 Watt High Brightness LEDs (such as Jam eco part number 2006895) at a regulated 330 mA. It can drive 1 to 3 High Brightness LEDs wired in series depending on the power supply voltage.