Researchers at Cambridge University have just achieved a spectacular breakthrough in electronics design. They have developed new ultralow power transistors that could function for months or even years without a battery. These transistors look for energy from the environment around, thus reducing the amount of power used.
Dr Sungsik Lee, one of the researchers at the Department of Engineering says, “if we were to draw energy from a typical AA battery based on this design, it would last for a billion years.” The new design could be produced in low temperatures and they are versatile enough to be printed on materials like glass, paper, and plastic.

Basically, transistors are semiconductor devices that function like a faucet. Turn a transistor on and the electricity flows, turn it off and the flow stops. When a transistor is off however, some electric current could still flow through, just like a leaky faucet. This current, which is called a near-off-state, was exploited by the engineers to power the new transistors.
The researchers developed a thin-film transistor (TFT) from In-Ga-Zn-O (indium-gallium-zinc-oxide) thin films. To make the material less conductive, the films were fabricated to avoid oxygen vacancies. Eventually, they achieved a new design that operates in near the OFF state at low supply voltages (<1 volt) and ultralow power (<1 nano watt).
The transistor’s design also utilizes a ‘non-desirable’ characteristic, namely the ‘Schottky barrier’ to create smaller transistors. Transistors today cannot be manufactured into smaller sizes since the smaller a transistor gets, the more its electrodes influence each other, causing a non-functioning transistor. The use of the Schottky barrier in the new design creates seal between the electrodes that make them work independently from each other. 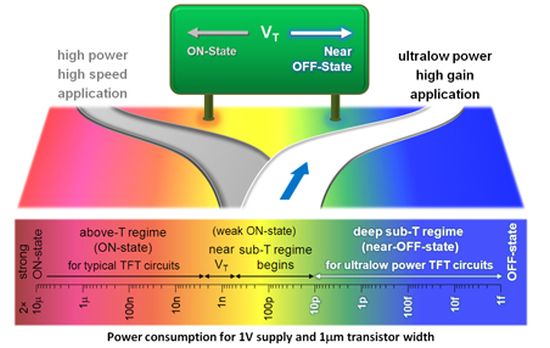 “We’re challenging conventional perception of how a transistor should be,” said Professor Arokia Nathan of Cambridge’s Department of Engineering, the paper’s co-author. “We’ve found that these Schottky barriers, which most engineers try to avoid, actually have the ideal characteristics for the type of ultralow power applications we’re looking at, such as wearable or implantable electronics for health monitoring.”

According to Arokia Nathan of Cambridge’s Department of Engineering, the second author of the paper, this new design can see use in various sensor interfaces and wearable devices that require only a low amount of power to run. Professor Gehan Amaratunga, Head of the Electronics, Power and Energy Conversion Group at Cambridge’s Engineering Department sees its use in more autonomous electronics that can harness energy from their environments similar to a bacteria.
Read More: Ultralow Power Transistors Function for Years Without Batteries