Nowadays many of the most “exiting” chips come only in leadless packages, such as BGA and QFN which are hard or impossible to solder just by soldering iron, because leads are under the chip where they can’t be reached. These kinds of chips are usually soldered using reflow soldering. In reflow process solder paste is used instead of solder wire. It contains very small balls of solder in flux, diameter of the balls is just few micrometers. First this paste is put on the contact pads, then components are placed on the pads and whole board is heated in reflow oven where solder balls in the paste melt and attaches the components firmly in place.
For the solder paste to work correctly temperature of the oven must follow correct temperature profile accurately. If the temperature rises too quickly it can damage the components and if the temperature rises too slowly, too much flux can evaporate and the components aren’t soldered reliably.

Real reflow ovens are usually expensive, like many other manufacturing tools, but ordinary toaster ovens can be used in reflow soldering with few modifications. They are much cheaper than real reflow ovens, but temperature cannot be set programmatically or accurately. External controller board can be used to control these ovens.

Toaster oven reflow controllers have been done before many times (for example 1 and 2). I wanted to make a simple and cheap controller that wouldn’t use outdated parts. Instead of buttons and dedicated display, it should use USB port for setting the temperature profile and monitoring the temperature if needed. This would be cheaper to make and easy to use. If the computer isn’t connected, it should be able to be switched on by just connecting the power supply, load the temperature profile from non-volatile memory and run without user intervention. 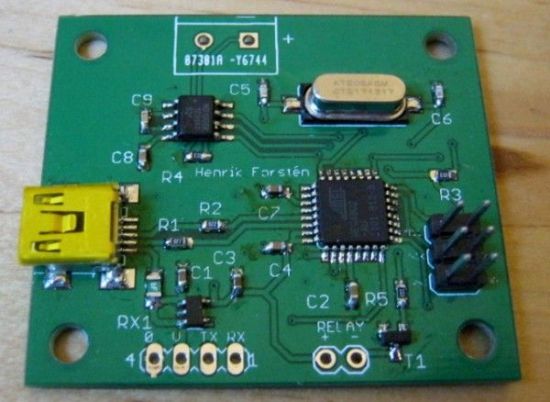 Because the oven gets very hot, it’s not possible to add any electronics inside it. Controlling is done by switching the power on and off rapidly with solid state relay that is connected on extension cord. Temperature is measured using thermocouple inside the oven. Microcontroller will read the temperature and output PWM signal for the solid state relay which can be used to accurately control the temperature of the oven.

I decided to use ATmega8U2 microcontroller, because I’m familiar with AVRs and this is the cheapest AVR with hardware USB support.

Because oven can get pretty hot I needed to use thermocouple for measuring the temperature, instead of cheaper temperature sensors ICs. I use MAX31855 as a thermocouple-to-digital converter. This is the most expensive component in the board costing 6.21€ at Dig key, even the solid state relay from dealextreme was cheaper costing only 5.08€.