In a bid to encourage greater use of TI’s Programmable Real-time Unit (PRU) built into the Sitar a AM335x and AM437x family of devices which power the Beagle Bone Black development board Texas have announced the PRU cape. The PRU is made up of dual 200 MHz coprocessors, implementing a low-latency subsystem optimized for deterministic, real-time processing allowing direct access to I/Os’ . It would be fair to say that this capability is seldom used by Beagle Bone developers because it has been found to be complex to program. 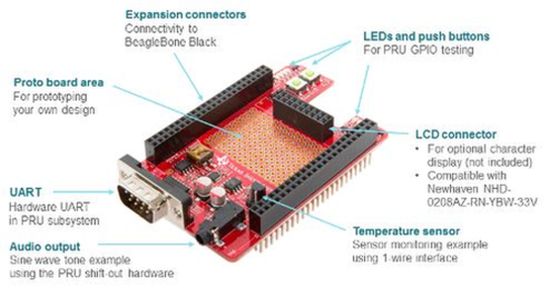 ca
The PRU Cape is supported with a software package including the Linux source code and a number of worked examples using the LEDs, push buttons, audio and UART. The code is available as part of the Sitar a Linux SDK. A new PRU-optimized C compiler and TI’s Code Composer Studio is also available for download.