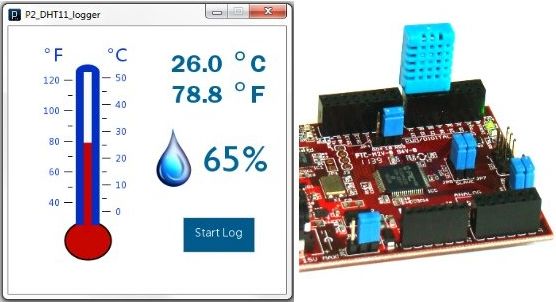 In this project, four pins of the DHT11 sensor is directly inserted into four I/O pins (7, 6, 5, and 4) of the Uno32 board. The power supply (1), data (2), and ground (4) pins of DHT11 go to I/O pins 7, 6, and 5 of the Uno32, respectively. The Uno32 pins 7 and 4 are configured as output pins and are set to High (3.3V) and Low (Gnd), respectively, through software to power the DHT11 sensor. Note that an I/O pin of Uno32 can source up to 18mA current that is sufficient to power the DHT11 sensor, which only requires less than 5mA during data conversion and transfer. Pin 3 of DHT11 is unused. Temperature and humidity bytes are read through I/O pin 6 of the Uno32.
chip KIT sketch
Writing firmware is easier with the use of the DHT11 library available for Arduino or chip KIT platform. The DHT11 library for Arduino was originally written by George Hadjikyriacou and was later modified by other people. Make sure you include the library in your chip KIT sketch. The following sketch is for Uno32 to read the temperature and relative humidity data (two bytes) from the DHT11 and send them over the serial port. The sampling interval is set to 2 seconds.
Read More: Temperature and relative humidity logger