Google’s latest and hottest gadget needs little introduction. Since its public unveiling in April 2012, the tiny head-mounted Android computer has been collecting controversy and sociological analysis. It is currently available in limited beta to eminent members of the tech community and to a selection of “Glass Explorers.” As members of the latter program, we are delighted to be able to explore Glass.
Growing up on a rich diet of dystopian tech fiction, we were filled with both intrigue and concern about Glass and decided to take our model apart to bring you a detailed view into the electronics guts of the device. 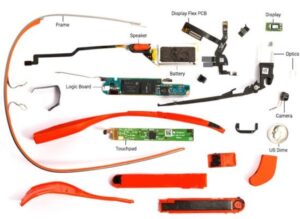 Gargoyles represent the embarrassing side of the Central Intelligence Corporation. Instead of using laptops, they wear their computers on their bodies, broken up into separate modules that hang on the waist, on the back, on the headset. They serve as human surveillance devices, recording everything that happens around them. Nothing looks stupider; these getups are the modern-day equivalent of the slide-rule scabbard or the calculator pouch on the belt, marking the user as belonging to a class that is at once above and far below human society.

Once a Glass Explorer is invited to purchase Glass online, they must schedule an in-person pickup appointment at one of three “Glass Studios” in Mountain View, Los Angeles, or New York. At this appointment, a Google employee walks you through the setup and usage of your Glass unit.