The reason for this project was to solve a problem I have. I sometimes do several days of hiking/backpacking in the wild and I always bring a smartphone with GPS and maybe other electronics. They need electricity and I have used spare batteries and solar chargers to keep them running. The sun in Sweden is not very reliable. When you need it as most it´s either raining or other circumstances that makes it impossible to charge with solar panels. Even when it´s clear weather it simply take too long to charge. Batteries are good but heavy. I have looked for alternatives but they are either very expensive or too large.
One thing that I always bring with me though on a hiking is fire in some form, usually an alcohol or gas burner. If not that, then at least a fire steel to make my own fire. With that in mind, I got stuck by the idea of producing electricity from heat. I know, the efficiency is very poor but it is at least possible! So, with inspiration from my previous project (Thermoelectric-Fan-Driven-by-a-Candle) I decided to build my own thermoelectric charger. There are similar projects available but not that fulfill my requirements (what I could find). 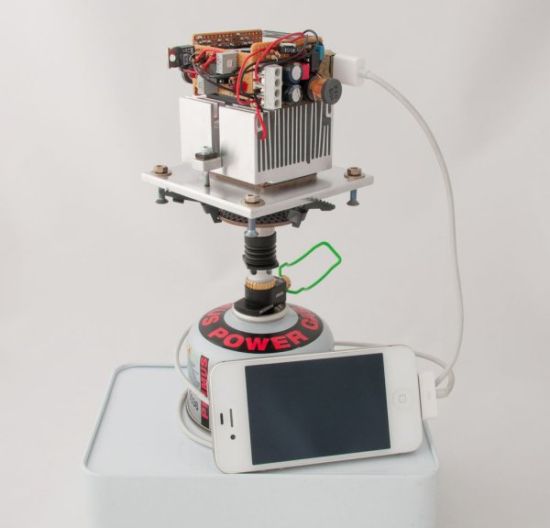 Concept:
I´m using a thermoelectric module, also called pettier element, TEC or TEG. You have one hot side and one cold. The temperature difference in the module will start producing electricity. The physical concept when you use it as a generator it’s called the See beck effect. Thermoelectric modules are mainly used for the opposite effect, the Pettier effect. Then you apply a electric load and it will force a heat transfer from one side to the other. Often used in smaller refrigerators and coolers. Read more about I here:
http://en.wikipedia.org/wiki/Thermoelectric_effect
My requirements: