A single AVR microcontroller (the ATmega 1284P) has been used to create a standalone computer system which runs the BASIC programming language. The 1284P runs TinyBASIC Plus, generates composite video signals (using TVout) and reads PS/2 keyboard input.
A single sided PCB was used to hold all the components meaning it is easy to manufacture the computer at home using processes such as photo-etching. Additionally, the component count is fairly low and only one IC is required (the 1284P).

I created this project as a sort of follow up to my Arduino BASIC Shied project which used a custom designed shield to turn the Arduino UNO into a computer running the BASIC programming language. The shield worked correctly but two reasons made me decide to design a new computer; the TV out resolution was low meaning some of the lines were wrapped onto next line and an Arduino was required to operate the computer (it was not entirely standalone). I decided to design a new computer which would still run BASIC but use only a single AVR microcontroller to keep circuit design simple, the component count low and the cost down.
After managing to find a PS2 keyboard library which worked with TV out without causing any issues, I modified the Tiny BASIC Plus sketch to use TV out and the PS2 keyboard (rather than serial) and tested it the AT mega 1284P (I am using the Arduino boot loader and IDE to program to the 1284P) which worked correctly. It was then a simple case of designing a PCB and sending it off to be manufactured. I was able to keep the PCB single sided by using two jumper parts (two 0 ohm resistors). The build instructions on this page explain the process of building the computer step by step.
Once the computer had been completed, I had a functioning standalone system which uses a single AVR microcontroller.
The computer has some of the GPIO pins of the 1284P mapped to female pin headers allowing components to be connected. Pin headers are also used to allow the power supply rails to be connected to. By connecting a PS2 keyboard, composite video enable display (such as a TV which has a yellow RCA socket) and a power supply (such as a PP3 battery), the computer can be used and programmed in BASIC. The EEPROM of the 1284P is used to save the BASIC programs to.
Ideally, I would like to have included an SD card for program storage but I was having issues with the FILES command (the Tiny BASIC command) displaying random characters on the TV. Autorun BASIC programs are found and run fine (when an SD card is attached) but the FILES command does not show a list of files on the SD card like it is supposed to (rather the random characters). I am unsure of the issue which is causing this (it may be linked to the variable types used to store the file names and the different variables used by TV out but I am unsure) so I did not include an SD card. If this issue was fixed, I would include an SD card on a future version.
In summary, I have been able to create a standalone computer system running the BASIC programming language with composite video generation and PS2 keyboard reading using only a single AVR microcontroller. 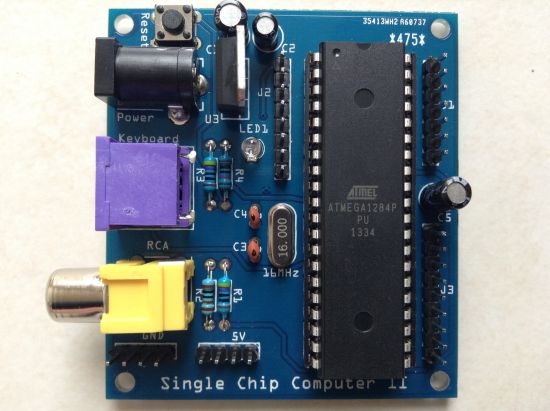 1 x PCB / Strip-board / Matrix-board (depending on how the computer is going to be constructed. If a PCB is not used, different components may be needed as some have footprints such as the RCA socket which cannot be placed on strip-board)
Today I assembled one of the new PCBs and it works as expected. With this PCB, I used male pin headers for the IO pins as I personally think they look better than female pin headers (especially when cutting female pin headers down as they usually leave an untidy edge). When testing IO pins, I found pin 1 of the AVR (although mapped to a pin header) cannot be used for GPIO as it is in use by the keyboard (this is something which could be addressed in a later version of the PCB). I have also changed the main image of this project to the new PCB.