ENC28J60 based Ethernet module.
As you can see from the image above, the ENC28J60 module is very small. The PCB is more or less one-inch square which is almost as small as the included Ethernet jack.
I decided to make a simple sensor webserver using the ENC28J60 that I got from EBay. I knew that there were already several sensor webserver projects posted on the internet but I couldn’t resist the temptation of making another one because I had a couple of sensors and an extra microcontroller lying around.
The simple sensor webserver is capable to measure temperature and relative humidity of a place or a room and deliver the data as a webpage to a request of a client. It is composed of a temperature sensor, a humidity sensor, an 8-bit microcontroller, and the Ethernet module that I got from EBay. 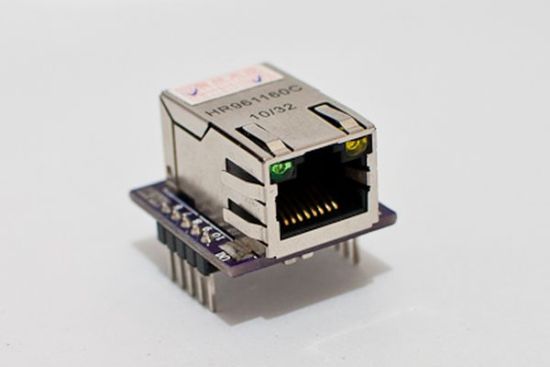