PORTLAND, Ore. — Laying claim to the world’s smallest high-precision inertial measurement unit (IMU) Epson Electronics America, of San Jose, Calif., unveiled its six-degrees-of-freedom (DoF) combo accelerometer/gyroscope chip, which measures a scant 12x10x4 millimeters, at the annual meeting of the Association of Unmanned Systems International 2013 (AUVSI, Aug. 12-15, Washington, D.C.). Cast in its quartz-micro-electro-mechanical system (Q-MEMS) process, Epson contends that the V340’s low drift — seven degrees per hour — gives it bias instability that rivals much larger IMUs.
“Q-MEMS’s advantage is that its makes possible a form factor like the V340 — about the size of a Chick let — and yet this IMU achieves the same level of performance as much larger units,” said David Gaber, product marketing manager for IMUs, in an interview with EE Times.
The new V340 IMU is 90 percent smaller than its predecessor and is aimed at high-precision inertial sensing applications such as navigation in unmanned systems, down-hole drilling, medical equipment, and aerospace. 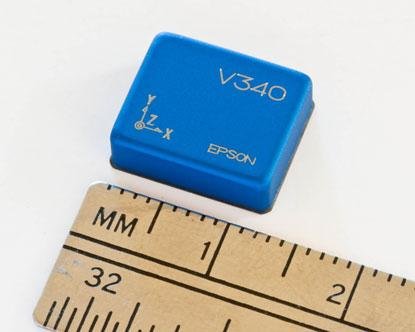 “The V340 is a completely new IMU that is a tenth the size of the original unit, which was accomplished by downsizing the electronics, gyroscope, and accelerometer, but in a manner that did not sacrifice performance,” Allan Armstrong, director of sensing and timing products at Epson, told us.
Epson claims it achieves smaller size at the same performance level by leveraging the inherent stability of the quartz material to achieve a design that does not need compensation to function properly. Because of its simple, uncompensated design, the V340 also consumes just 18 milliamps and, like all Q-MEMS devices, is relatively immune to vibration and shock in harsh operating environments.
At AUVSI, Epson also showed its new G352 and G362 IMUs, which serve applications requiring the widest dynamic range and greatest vibration and shock immunity. Using calibrated temperature-compensated designs, the G352 has a measurement range for the gyro of plus or minus 450 degrees per second, and plus or minus six-Gs for the accelerometer. The G352 will be used for unmanned vehicle guidance, navigation, and control in harsh operating environments.
The G362 achieves a three-degrees per hour gyro bias instability, rivaling the performance of a fiber optic gyroscope (FOG) or ring-laser gyro (RLG), but in a smaller, less expensive package. The G362 will be used in applications where high accuracy must be maintained for extended periods, such as stabilization of gimbaled cameras and antennas.