Gamma photons interacting with cheap photodiodes produce small current pulses which are easily amplified and allow detection of individual photon events. This offers the possibility of cheap, small and rugged radiation detectors of reasonable sensitivity. While not as sensitive as larger GM-tube detectors, this solid state device is still quite useful for determining if something is radioactive enough to be interesting/concerning.
The circuit is simple, but as currently implemented has one major problem; poor temperature stability. As it is DC coupled right through to the comparator moderate temperature changes cause the threshold level to drift enough that the noise floor starts causing false triggering, or the sensitivity to less energetic radiation drops. 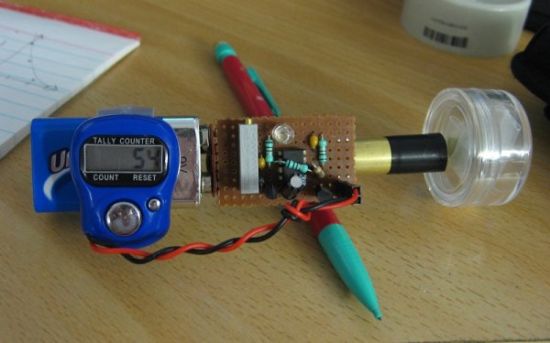 Similarly DC shifts associated with battery voltage drop is also a problem. This is easily remedied by AC coupling the comparator stage. The unit shown has an extra output transistor driving the counter module, this is not required for the basic qualitative detector – it is implemented in much the same way as the counter interface of the ion chamber alpha counter. There is great similarity between the two circuits really, and one might build a dual gamma/alpha counter in a quite small package. (Note that there is also some sensitivity to higher energy beta.)
Construction is fairly non-critical. The sensor assembly was built using a mixture of SMD and through-hole components, with the BPW34 photodiode placed over the PN4117A JFET body. The completed sensor head was then placed in a small brass tube, with a thin piece of brass shim-stock foil closing one end to exclude light and offer some EM shielding to the sensitive front-end electronics. The other end was closed with wadding and liquid electrical tape. The detector module has three wires emerging from it and can be integrated with different electronics.
Spectroscopy *may* be possible with this detector, pulses do vary in amplitude, and appear to cluster around several similar amplitudes for different sources. However, the physical semiconductor sensor is quite small and no doubt only a small fraction of the energy of higher energy gammas is collected by it. It likely makes a very poor spectroscope, resolution wise, but it may be sufficient to tell apart the usual suspects, U, Th, Ra, and Am.