A new low cost development board is available for pre-ordering at $20, it is called “pcDuino4 Nano”. pc Dui no term comes from combining Mini PC with Arduino and it is a platform that runs PC-like OS such as Android ICS or Ubuntu.
pc Dui no boards can be used to learn programming and understand how to use Linux OS. It also works as an interface with electronics hardware alongside the typical activities such as browsing internet and watching movies.
pcDuino4 Nano based on Allwinner H3 SoC, which has a 1.2 GHz quad core Cortex A7 CPU 512KB cache, with an ARM Mali-400MP2 GPU up to 600 MHz. This chip supports DDR2 and DDR3 memories, Ultra HD 4k and Full HD 1080p video decoding, camera and audio integration.
pcDuino4 Nano comes with 1GB RAM memory, micro SD card slot, USB 2.0 and micro USB ports, HDMI port, 3.5mm jack, 10/100 M Ethernet, DVP interface, pin headers for expansions and powered by 5V. 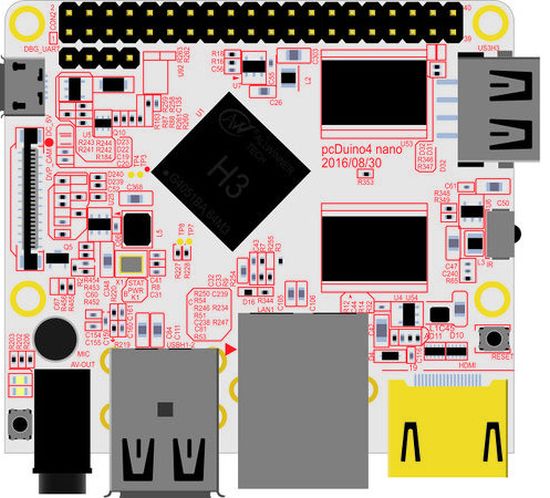 Here is the full specifications:

You might notice that this board is very similar to another one called “NanoPi M1”. They have the same design, features, ports and schematic and according to CNX Soft the manufacturer is the same.
Read More: pcDuino4 Nano, A $20 Development Board