In the last few years, as serial and parallel interfaces have almost disappeared, electronics enthusiasts find even more difficult to program microcontrollers; old time programmers don’t work any more; common solutions include using USB to serial adapters (which can’t accept direct access but only slow API calls), or add-on interface chips, like FTDIxxxx, which appear substantially as serial interfaces and require custom or proprietary drivers.
So why not use PIC controllers and their native USB interface?
After searching a while I couldn’t find an USB programmer which was at the same time functional, free, and open source, so I decided to design one.
Open source means that all sources and schematics are given free of charge with the rights to modify and release them. 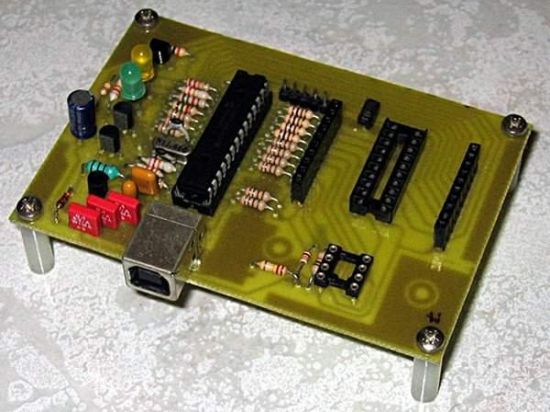 USB & HID firmware (v0.8.0)
In order to use the USB interface included in some PIC devices we need a firmware that implements one of the classes defined by the USB consortium or a new one; I opted for the HID class, which is supported natively by all operating systems and so doesn’t need any driver. Maximum allowed speed is 64KB/s, although with my application I measured something in the range 20-40 KB/s, certainly enough to program devices with memory of 100KB at most.
Like all USB devices this one too has a vid and a pid; these are usually obtained under payment; I got a combination for free from pid.codes: 0x1209&0x5432; anyways it’s possible to configure both, so I leave the choice to the user.
The programmer appears to the system as a HID device that exchanges 64 bytes packets every 1 Ms.
The USB firmware comes from a nearly unknown open source project, written by Alexander Enzmann, which I modified and adapted to the MCC18 compiler.