Researchers at the University of Cambridge have created a new high-temperature superconductor capable of trapping a magnetic field of 17.6 Tesla, improving on a record set over a decade ago. The advance is yet another step toward making superconductors viable for building effective large-scale smart electricity grids, maglev trains and flywheel energy storage.
First discovered in 1911, superconductors are a class of materials including mercury and lead which, when cooled down to temperatures near absolute zero (–273 °C), can conduct electricity with zero resistance. Today, these materials are used to build the powerful electromagnets that go inside MRI machines, maglev trains and magnetic confinement nuclear reactors (tokomaks). In the future, they could be used to increase the efficiency of the power grid by carrying large amounts of electricity with very little loss.
In the late 1980s, scientists discovered a new class of materials that displayed superconductive properties at temperatures of up to 130 K – well above absolute zero. These so-called high temperature superconductors (HTS) are very attractive for real-world applications because they can be cooled with liquid nitrogen rather than liquid helium, making them much easier and cheaper to operate.
Now, a group of researchers at Cambridge University has managed to create a HTS that can trap a magnetic field of 17.6 Tesla, breaking a record that had been standing for over ten years. Trapping a large magnetic field is essential to conducting electricity effectively, and so this feat, despite improving on the previous record only by a mere 0.4 Tesla, is still an important step toward making cheap and effective superconductors within our reach. 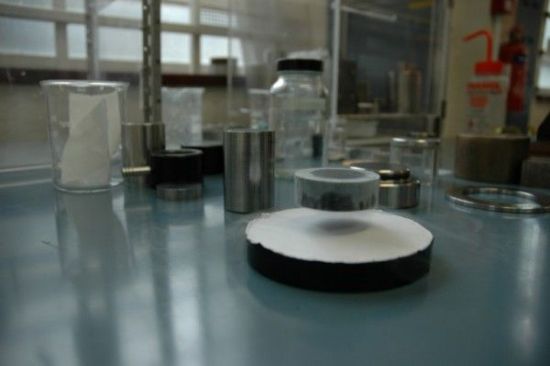 “The fact that this record has stood for so long shows just how demanding this field really is,” said Professor David Cardwell of Cambridge’s Department of Engineering. “There are real potential gains to be had with even small increases in field.”
To achieve this record performance, a team of scientists led by Prof. David Cardwell used a golf ball-sized sample of a high-temperature superconductor called gadolinium barium copper oxide (GdBCO).
Cup rates, or copper-based HTSs like GdBCO, are already being used in the real world for specialized applications. For instance, the Large Hadron Collider, the world’s highest-energy particle accelerator, uses tens of kilometers of superconducting copper-based electrical cable. However, these materials can be very brittle, and the forces generated by a strong magnetic field can cause them to explode.
Cardwell and colleagues surmounted this obstacle by reinforcing the GdBCO with a 3 mm thick layer of stainless steel and tweaking its microstructure to increase its current carrying and thermal performance. The resulting sample harnesses the equivalent of three tones of force in a material that is normally as brittle as fine china.