I’m currently waiting for the boards for my Ultrasonic Anemometer Rev B to arrive from Hong Kong and this gives me some time to write about the MPPT Solar Charger design that I did quite some time ago. I published a series of posts on a Arduino MPPT Solar Charger Shield and got a lot of encouraging feedback. But that shield was more of a proof-of-concept than a finished product.  While it generally performed well it drew way too much current when idle to actually be deployed unless you can count on plenty of sunshine every day.
Aiming for very low power consumption
While I like the Arduino platform I had to admit that it’s probably not ideal for a low-power design. Yes there are some things you can do to reduce the 50mA or the Arduino draws but it will never be truely low power. So I designed a stand alone version with plenty of extra features that I hope to draw only a small fraction of the current. I particularly care about the idle current, i.e. the current it pulls when the solar panel is not producing any energy. In winter, the panel might be covered by snow for weeks and you don’t want your charger to drain the battery during that time. With this new design I’m aiming for an idle current in the tens of micro amps. Even if it ends up being 100 micro amps that is still 500 times less than an Arduino uses just by itself. And that means it draws less than 1Ah (ampere-hour) per year so you will never drain the battery no matter how little sunshine there is. 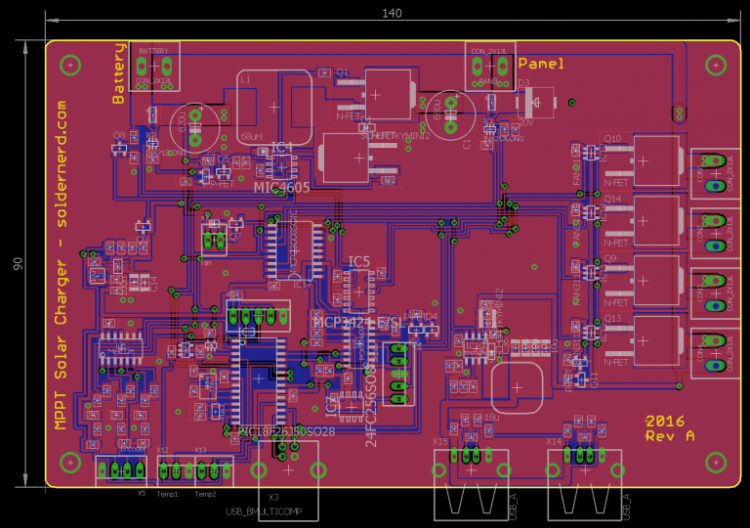 PIC18 series microcontroller
At the core of the design is a PIC18F26J50 in a 28 pin SOIC package. It’s capable of running at down to 2.15 volts and consumes extremely little power when running at lower clock speeds. And apart from that it features USB so we can have all the benefits of USB without any external components except, of course, a USB socket.
The PIC has two crystals at its disposal. A 8MHz crystal which will be boosted up to 32MHz by its internal PLL. That’s what the PIC will run on when there is work to do. And then there is a 32.768kHz crystal that will be used to run its real-time clock (RTC). When there is little to no work to do this low-frequency clock will also be used to run the CPU which will greatly reduce power consumption. Power consumption is approximately linear in frequency so this should cut power consumption by a factor of about 1000 compared to full-speed operation.
Read More: MPPT Solar Charger Design