I’m a fan of LEDs, lots of LEDs.  So here’s a slightly less crass way of using LEDs for decorative purposes. While this is by no means a neat and polished solution, and probably not the first of its kind, however the pulse effect is as far as I have seen unique, and exactly what I wanted.  I hope that this will inspire others to create similar.
The set-up It consists of a plain, unmodified vase, and a small battery-powered unit that sits behind a vase and shines three LEDs to give some nice ambient color. 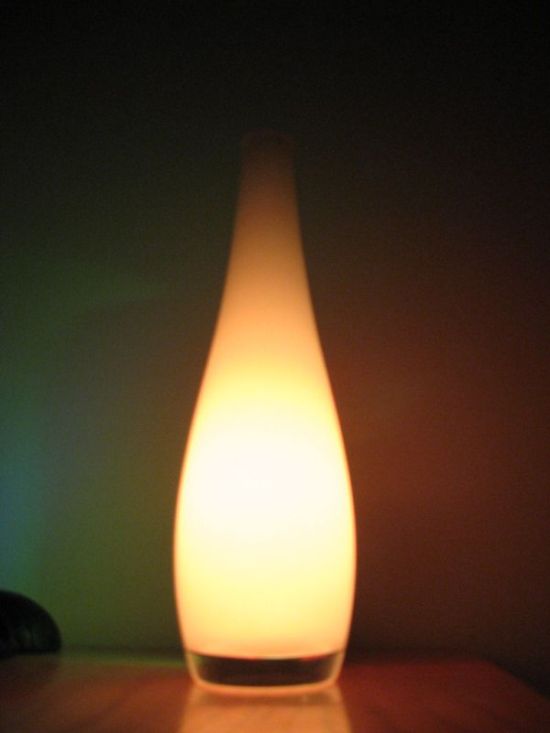 The circuit is powered by a microcontroller, in my case, a PIC12F683, I’ve included source code for the PIC12F683, but presumably it can easily be ported to Atmel or other microcontrollers.
I am writing this instruct able for those with experience with circuits and microcontrollers, I am happy to answer any questions anybody has.
The circuit can be split into 5 parts:
1. The brains – this will control the LEDs and produce the colors and pulses of light
2. The power – I use lithium-ion cells, but the circuit works perfectly well using 3AA or AAA batteries typically this will run the circuit from a week up to a month depending on battery.
3. Light detection – this is so that the circuit turns on only when dark
4. Voltage reference – this is needed for low-battery detection, for lithium-ion cells, this is important since over-discharging damages the cells.  For AA or AAA batteries, this is less important.
5. LEDs!